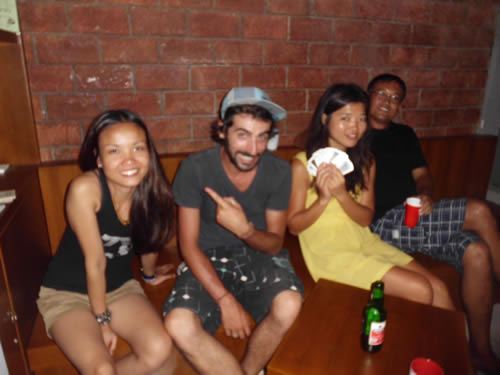 In Bali, playing ‘ Shit Head’ card games with my room mates became my daily routine.  It started the first night when I just woke up from an all day sleep since I arrived that morning (that was from the worst flight ever courtesy of Airasia’s changed schedule in such a short notice!).

When I woke up around 6pm that day,  I went checking my Facebook at the lobby where WIFI works and there was the French dude hanging out, I sat beside him, then later on a perky Korean girl joined us, and a quiet Russian dude.  We started chatting with Echa (The Bedbunkers Hostel Queen, I just meant she’s the owner) and later on I know them as Benjamin, Sabong, and Zulk.  We had dinner together and then Ben raised the idea of playing the card games when we’re back to the hostel. Hmmm?  I should call this group ‘Shit Head Gang!’ hahaha! It doesn’t sounds any good at all but its funny, so you guys can’t do anything.  As from my blog, the gang has its official name now! 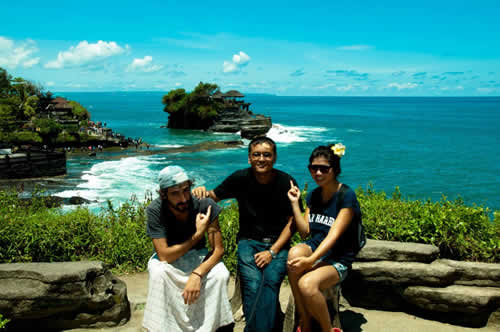 So, that night became every night, whatever we do in the morning we always get to meet up at dinner or at the lobby for the game.  The second night was the funniest, as Ben keeps talking in French (prolly murmuring nasty stuff about us)and by the way, he keeps calling us girls, EVIL! So I asked everyone to start talking in our native language.  Sabong was a little reluctant at first, thinking Philippines only speaks English (she’s a sweet girl), but then I told her we have Tagalog to speak and other dialects and then everyone was up for it.

The Rule: NO ONE SPEAKS ENGLISH IN THE GAME!

Everyone spoke their tongue, French for Ben, Russian for Zulk, Korean for Sabong, and I spoke Tagalog.  I tried to get Fajar(the hostel staff to join in at least the language game, but he wouldn’t!), the couple (Echa and Jeff) were of course, always busy and running around to join us but they share our laughs anyway, all good.

That was fun! Everyone’s laughing, I know each talked something cheeky or funny but we did understand each other. The game ended a lot more fun than it was the first night.  Ben confronted us in the end when Sabong and I started talking to each other about Ben on our own language, Ben said, “I hate you women, how you understand completely each other just by looking in each other’s eyes! Unfair!” and we laughed. I told him, he can too if he choose to understand it.

Although, I hate the gang for not telling me their plans to go to… Was it Tanalot?  Hah! All I know was, I hate that I wasn’t there to complete the gang!!!!  Look at that photo?!

It was the last ‘Shit Head’ game that fun, the next night was ‘Sky Garden‘ Night.  That was the last night the team was complete, Sabong and Ben were leaving the following day.  Ben left early to walk to the beach and wait for his flight . He said he will walk to the airport under the crazy heat of the sun and hope he would not die, while the rest of the gang and I went out to get some lunch. 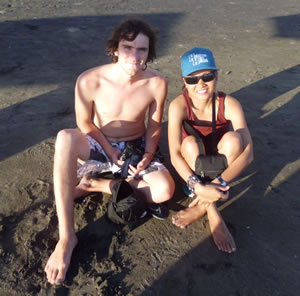 After Lunch, Sabong was about to leave…sad…but then, Jamie was arriving that day too so its all good, Team Jamie‘s reunion.  I’m leaving the next day anyway, I did not see Zulk after that Lunch even if he stayed 2 more days after I checked out from the hostel (according to him on Facebook, he went to check out other places in Bali).