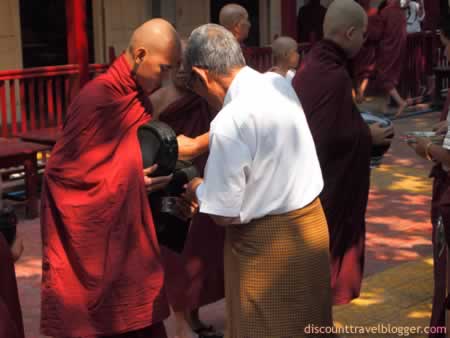 It was not in my itinerary to watch how they feed more than 2000 monks in a monastery in Mandalay.  However, when the taxi driver suggested it, I thought it was something different to see aside from seeing them from the streets every morning. 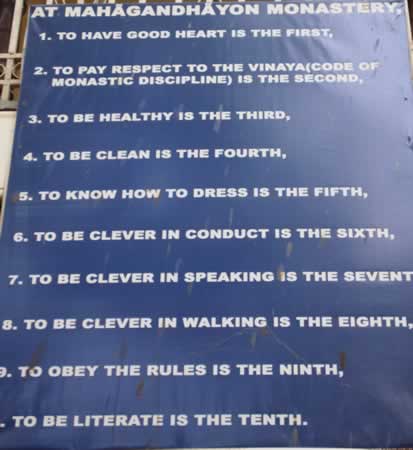 (Buddhist teaching that shows how simple they live)

We came half an hour earlier than the scheduled beginning, but it was a good time to find a good spot to take photos since there were a lot of tourists and media waiting to see what was about to happen.

(Food is prepared with these huge pots and woks everyday) 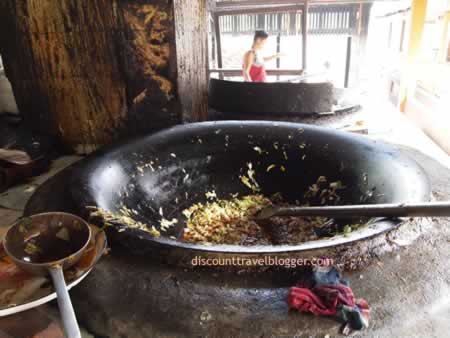 The motorbike taxi driver was nice enough to tour me around the monastery showing where the monks prepare their food and where helpers cook them.  There were huge woks and pots with giant laddles used to cook and serve the food.  Those monks were not vegetarians but they were taught not to get attached to meat, meaning, they can have meat but not get voracious and addicted to it.  Discipline is one of the strongest point they would want to teach the monks and the novice in that monastery. 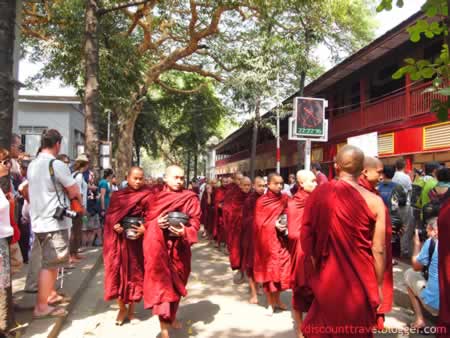 (Monks were lining up for their food, while tourists lined up for photos)

Soon enough, the feeding begun.  Monks lined up with their pot on hand, uncovering it to get it ready as they pass by the servers.  Locals and devotees sometimes volunteer to serve food to the monks, not serving them on their table but putting food in their pots.  One by one, the server scoops a big serving of rice and put it into the monk’s pot.  First stop was the rice(there were several stations of each to make the distribution faster), then the vegetable, and curry.

It was nothing too special but it was worth it for an experience.  I have seen monks feeding in Bangkok before but not as big population of monk as that.  Anyway, I’m just blessed to have witnessed the special event for monks in Mandalay, Myanmar.