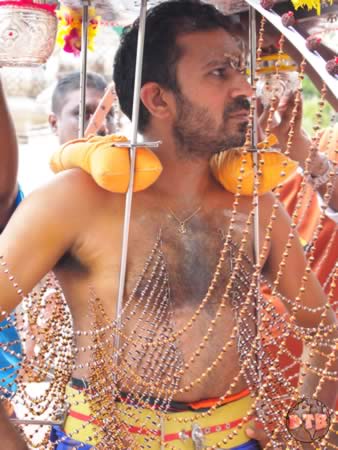 It was January 27 or 28 this year when they celebrated Thaipusam in Kuala Lumpur, particularly in Batu Caves.  Thaipusam is celebrated on the full moon month of Tamil which is January or February.  It is a Hindu festival that seems to parallel the Catholic’s Lent.

In the Philippines, we celebrate Lent widely across the country since our population’s majority is Roman Catholic.  In one of the province called Pampanga and some nearby towns of Tarlac City where “Kapampangan” speaking natives’ habitat is, they take it a lot more seriously.  Flagellants penance every Lenten Season are either crucifixion or other extreme self-inflicting pain act.  Devotees believe that by doing this, they release all their sins or their noble wish will be granted. 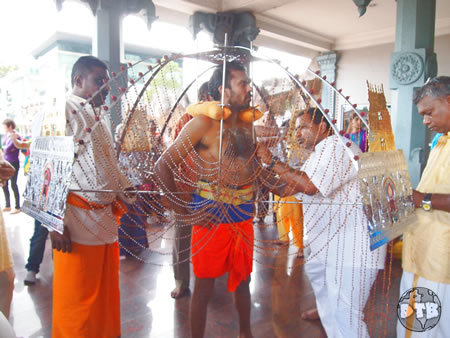 (Putting more hooks and needles on his skin)

*Batu Caves is the main place where Thaipusam Festival is held in Malaysia, there are 2 other caves below which is the Museum cave and the Art Gallery Cave.  Ramayana Cave is also located at the far left where the tall statue of Hanuman is standing.  Thaipusam Festival is a Hindu celebration of commemorating the vanquishing evil demon they called, Soorapadman. 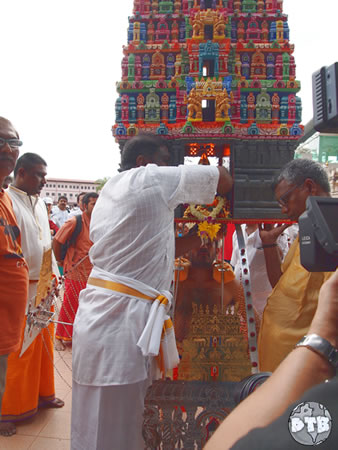 As I accidentally witnessed one, one month after Thaipusam festival in KL’s Batu Caves.  I am not sure why and how they were still doing it but I did see one, just after climbing the 272 steps of the famous Batu Caves.  Kate and I heard some music being played at the Mahamariamman Hindu Temple just beside the steps.  I saw one guy that looks like he will do the ritual, I climb at the side of the temple’s porch to get a good shot but one Indian guy wearing the costume asked me to come in instead so I can get a better shot. Lucky. 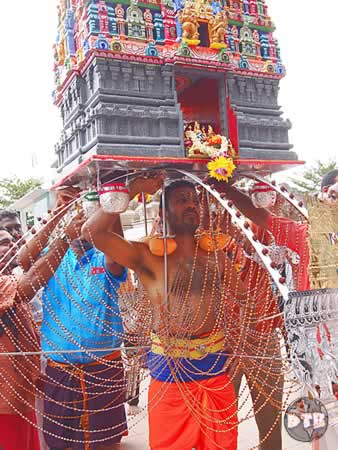 I went in and tried to zoom in my camera,  the other Hindu men that seems to be the leaders of their temple asked the crowd to make way for us, photographers and the media guy(carrying his professional video camera) as we took a good shoot of what was happening. 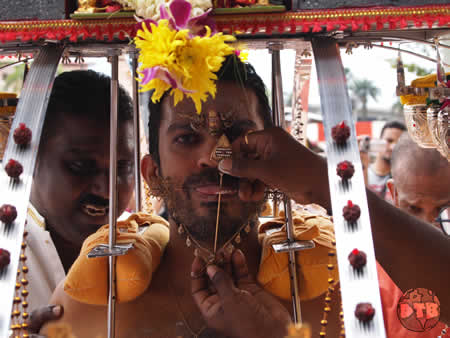 The guy started with this metal scaffolding like attached to him,  with tons of hooks piercing his skin on his back and chest.  He then danced carefullfy and from time to time he stops for additional offering they put to add weight on what he was carrying. Little pots (they said filled with milk or honey), more needles that gets bigger and longer pierced on different parts of his upper body. 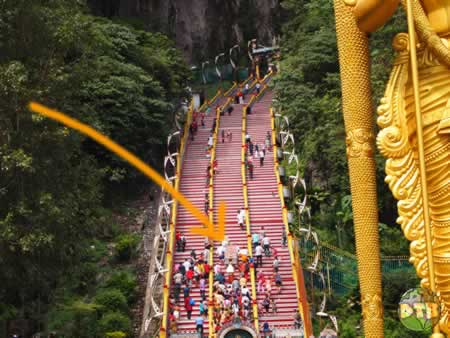 Soon enough, they added the Mahamariamman Hindu Temple replica on top of the metal he’s carrying that obviously, very heavy.  He danced again.  Then there were needles accessorized that pierced his forehead, and then a longer one to pierce from his left cheek through his tongue and out to his right cheek.  It didn’t stop there, a shorter needle was pierced from his upper lip, through his tongue again going out of his lower lip.  The leaders put white powder on the tip of his tongue and then he danced once again.

After few minutes of dancing, the procession begun, he walked going to the Batu Caves and together with the Hindu devotees in their costume as well, they marched the 272 steps of the cave.  It was an absolute sacrifice, having myself tried going up that more than 200 steps without carrying anything but my camera and a little bag was already a pain.  I can just imagine how painful it was for him carrying that weight as he climb up that cave of Batu.

(Here’s my video of the event)

I felt lucky to witness the event, I thought I was a month late for the festival but how good our timing were.  They were just starting when we came,  and how about the fact that we were given way to get a good shot of everything that was happening was a blessing!  Of course, you all be enjoying those good videos and photos I took on this blog.

One thought on “Thaipusam Follow Up Witnessed in Batu Caves”