9am.  Meet up time with Jamie outside our dormitories, I woke up early because the girls were leaving.  Koo Yin and Lynn will drop off Kaite at the airport heading for Kota Kinabalu before they return their rented car and head back to Kuala Lumpur.  Said goodbyes to the girls and slept in a little, it was 6am I think. 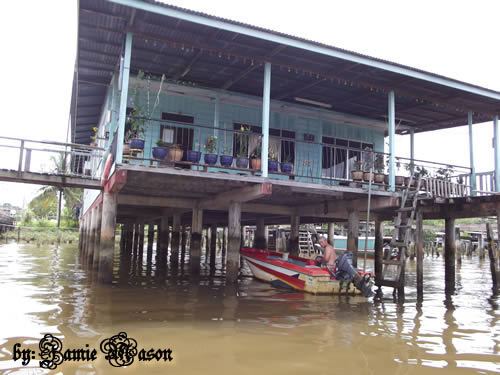 I woke up after an hour, had a shower and went near the pool with my phone to research about what else to do in the city while waiting for my laptop to charge and Jamie to get up.  Jamie showed up early too, probably half past eight.  Told him I want to do the Water Village and Proboscis Monkey boat trip, the latter was more appealing for me but what else to do in Brunei than seeing mosques and these two.  Plus, I wanna see the jungle side of Brunei and it seems that Jamie’s plan was the same.  I told Jamie I’ll just finish one post and then we’ll get some food before heading to start our adventure, he was nice enough and patient to wait for me (very much appreciated Jamie!).

Water Village Tour for B$10

I took the map the girls gave me and gave it to the leader, we had Nasi Ayam again and headed to the boat area.  A boat man approached Jamie selling the Water Village and Monkey trip for B$40, we didn’t have enough having B$8 left in our pockets, we have to change money first to do it but then one boat man says we can do Water Village trip for B$10 for 2, making it B$5 (PHP 175) each, we hopped on. Of course, the first boat man was upset confronting our boat man, but we want the cheapest deal. Who doesn’t anyway?

It’s Team Jamie now that he got a good deal for that boat trip, the team was shining bright early that day. He’s dealing with it great.  After that trip, we went to the mall and changed money, got ourselves some water and fruits to fill us a bit before Jamie started to bargain a B$30 trip for Proboscis Monkey down to B$25. He did a great job there. 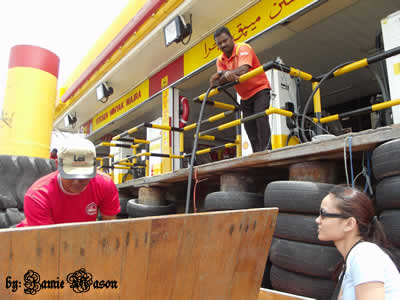 Our boat guy went to fuel his boat first, so we headed to the Water Village again and it was cool that they have floating Shell Station there, straight from the tanker as Jamie said. That made me smile, make sense, water village is a floating community, school, homes, vehicles (boats, of course!), so why not have a floating fuel station hey? Makes their lives easier.

Brunei‘s Water Village is not like Philippine ones.  Theirs is their chosen way of living, not like the ‘ghetto’ squatters back in my country.  Their homes our mostly air-conditioned, with satellite dishes, big houses, well kept and all. 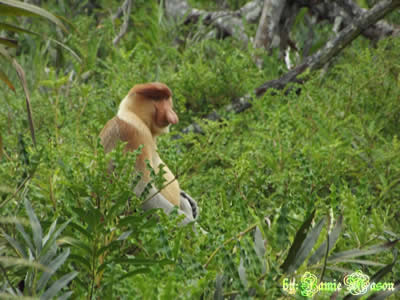 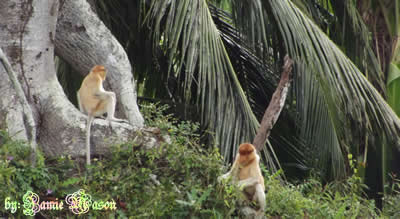 On board a boat with non-English speaking boat guy bound to their soft jungle, the Amazonic view along the way was amazing. “It’s like we’re in Amazon” Jamie said, and I could not argue with that statement, it is!

On the way there, you’ll get to see some eye sore-ing mining vessels that does not fit the scenic jungle, sucks.  Soon enough we have reached a place where bunch of Proboscis Monkeys were hanging out.  It took us more than half an hour to get few good shots of them, oh well I depended on Jamie’s photos because my camera ran out of batteries at the Water Village tour. 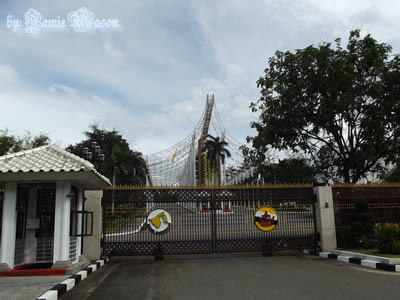 (Was it worth for 3 hour walk? Ask Jamie) 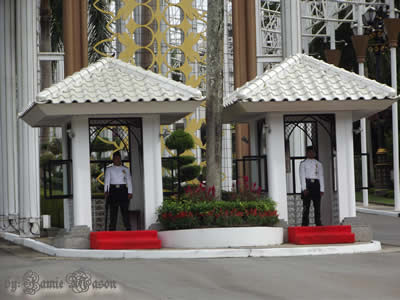 Team Jamie’s next plan was to see Istan Nurul Iman (as he did not see it the night when me and the girls went out). It was an impossible mission that became possible but Jamie was disappointed to see just the gates and I am not sure why the hell I did not told him about it .  I was thinking maybe he wanted to see it for himself and I just wanted to just have a company going to the Jam’asr Hassanil Bolkiah Mosque.  It took us hours to walk the walk going there only to get disappointed.

On the way back, I had a quick shower again, had 2 Nasi Ayam ( yes, that how hungry we are from the gates adventure! haha!) before heading to the Jam’asr Hassanil Bolkiah Mosque which we did not end up finding because we keep getting lost when we ask people and pointing us at the wrong direction.  Jamie gave me all his photos in Brunei as promised and I promised back I’ll give him credits on photos I will use that are his. I’m dead again after few minutes.  I need to be early next morning to catch the ferry back to Labuan.

2 thoughts on “Team Jamie’s Time to Shine in Brunei”