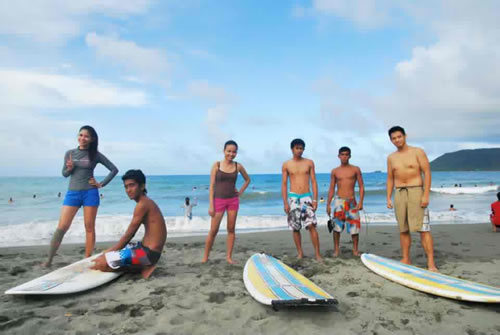 May 2011 when I first met my true love, they say you wouldn’t know until you found it.  True to their words, it was!  Yes, it was my first time to surf ever and didn’t know I will fall in love with that sport in my life.  I used to watch people surfing on TV and movies and looks really difficult so I didn’t imagine I could ever do that, plus the fact that I’m afraid of open water (I love being around water, but waves scares me a lot) and my imagination drowns me to fear it.

It was Leizel’s idea to go there since our friend Nick was visiting fresh from backpacking Southeast Asia.  The trip was 6 hours.  We took Victory Liner  busfrom Cubao going to Cabanatuan because every bus to Baler were full, it was 4 hour ride and then we took bus to Baler from Cabanatuan, that took us another 2 hours.  At the Baler Bus Terminal, we hired a tricycle to bring us to the guesthouses, everything was full, good thing the driver knows a new place to stay (they haven’t finished constructing the place yet, but we don’t care, its good enough for a night). We paid Php 600 ($12USD) for that big room and split the cost in three.

We arrived at 10am, the guesthouse was just few steps away from the beach.  We give it a quick look and went out to have lunch.  We ate Php 50 ($1 USD) Tapsilog meal (beef stew, fried rice, and egg), rushed back to inquire about surfing(yes, that’s how excited we were).

It was around 4pm when we started the surf lessons, we took the services of Maddox Surf school owned by Kuya Okoy.  They have the friendliest and coolest surf instructors like Ambo, Saddam, Noel, and the crew.  Kuya Okoy have competed locally and internationally on surf competitions and mind you, he’s not just good at it he’s awesome!  He won several surf cups so I think he knows what he’s doing in regards to surf business hey?  Php 250/hour ($5 USD) was the rate of their one on one surf lessons including the rent of the board.  Not bad eh? Really not. 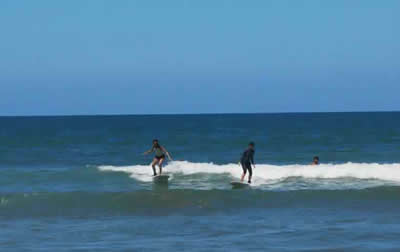 (Me and Leizel riding waves) 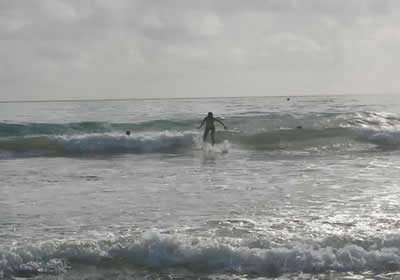 Okay, it was cool when we started the warm up exercises at the shore for 15minutes, stretching our muscles for the ride.  Our instructors teaching us the basics about the surfing, what do you call this and that, how to balance, stand on the board, and control the board’s speed and direction while your riding the wave.  After few minutes, we were ready for it!

I was soooooo excited (well, water + activity = me being so happy!), so Noel, my instructor, asked me to jump on the board face down and he was pulling the board to the deeper part of the water, it was relaxing not so sunny day, and I started asking Noel questions about Baler, the surfers, and more tips about surfing while watching other surfers made their way up on the board balancing and riding the wave smoothly like a pro.  Then, Noel asked me to be ready while he’s calculating for a good wave to start.  “Ready!” he said, “Go!” and he let the board go along the waves with the first time surfer…I didn’t manage to get up and ‘SPLASH!’ in the water, it was cool and funny, yeah definitely fun times! (I’m not expecting that I could do it the first ride though, I’m not a superwoman!). Three to five times I’ve tried I didn’t make it but Noel said, I’m almost there, he said just stand quick and spread your arms to balance yourself and you’ll be up and good to go on your own. 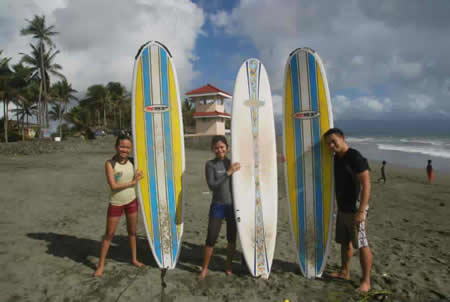 It was good motivating words from Noel, I was challenged to make it the next round, I didn’t know I was that close making it so I told myself to try a little harder next time.  The next try, I was determined to make a good stand so when he said “Ready!”, I really was, and when I heard “Go!” I took the leap and jump quick to stand up and I heard him scream “Wohoooooo! You made it!”. Wow! I told myself and it felt so good to finally stand on the board, it felt like I’m a pro surfer I’ve been watching on the movies before.  When I told Liz and Nick I was afraid of the waves, Nick said, “Look how far you’ve gone, now you’re riding the waves!”. True, true, it was very fulfilling moment that I finally lost my fear of waves (that of course, if I have a board with me).  It was fun doing it the rest of the time remaining, and we all decided to do it again the next day before going back to Manila. 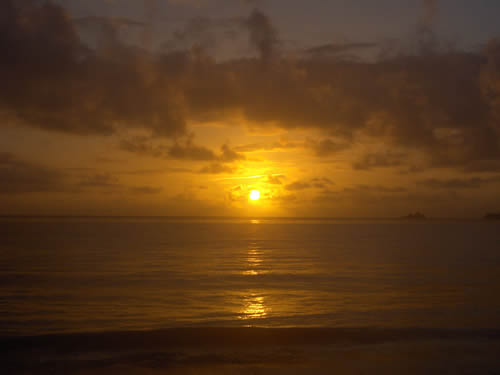 (Baler’s Sunrise on my blind camera capture, last shot I took before my camera died)

The next morning at 5am, Nick wanted to see the sunrise in Aurora that’s why he took the forced initiative from Leizel to wake us up that early if he wants to do that!  He did.  It was my first sunrise to see in a very long time, there was a religious parade happening too as the town was celebrating their feast day that day.  It’s beautiful and it felt awesome to wake up that early just to see the beauty of its Orangey ambiance from the sun.  We had lots of photo time but my camera died that morning (I know, sucks).  After breakfast, we decided to hit the waves again and this time we had two separate lessons (1 in the morning and 1 in the afternoon).  It was addictive and I know I’m in love with it!  I was hoping I could go back this November for the beginners competition but my schedule didn’t allow me to.

Oh well, I’m scheduled to surf again at the the surf capital of Asia this March, that’s in Bali!  I know I’m gonna have a blast there and I can’t wait! That is definitely experience I wouldn’t miss sharing you all, will be something worth writing about.  Baler, is the nearest surfing area from Manila I think, that is why millions of local first time surfers flocks to Aurora for this hell of a kind surf experience.  I wonder when will I be able to surf La Union and Siargao? Hmmmm…