April 29 – May 1, 2011 was my most anticipated dates since I was back in the Philippines.  It was the date set by my travel buddies that we are going to Baler, Aurora to try surfing the first time.  Well, at least for me and Leizel but not for Nick.

I am writing about sunrise because the day we came which was around 2 or 3PM we did not have a lot of surfing photos.  We did have lots of sunset photos though specially from Krabi, but because during our travels we always get to see more sunsets and this was actually our first sunrise in a long time.

Nick says, it was his first sunrise since he’s been to Southeast Asia.  Leizel’s an early riser, obviously she have seen more sunrises than us.  For me, it was my second sunrise since the last trip.  The first sunrise was in Mui Ne when I was waiting for Trang (my Vietnamese friend) to get up since we don’t have much time to see the town. I must say, sunrise in Baler was prettier just because I was just watching sunrise in Mui Ne along the road!  It should have been nicer if I knew the beach is just at the back of houses across the road our guesthouse!

Anyway, at least I saw a nicer sunrise in Aurora with my buddies.  I forgot whose idea was that, but Nick was up to it, he was willing to get up at 5am in the morning to see it because he’s leaving Philippines and also it’s the last league of his trip (going back home in 2 days after Aurora).  Leizel asked him if he really wants to do it, and he was like, “Sure!” as what he always say, never a no.  I, on the other hand was not an early bird could not say ‘yes’.  Leizel asked Nick once again if he wants to do it and as soon as he said ‘yes’ again, she said, “well, then wake us up in the morning!”.  We all laughed.

Get Up Early for Sunrise: Mission Accomplished!

The next day all set alarms rang, I woke up but did not get up yet!  Leizel’s alarm rung and she did not get up too.  Nick’s one has to go on for a few minutes before it finally woke him up, I was half awake and lazy.  I felt that he woke up Leizel and that woke me up too.  Then we all went to the shore few steps away from our guesthouse. 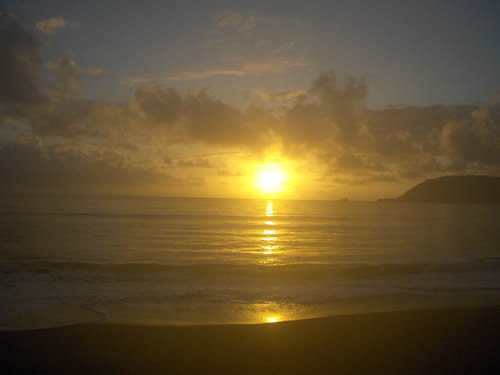 (And this one too)

We have to wait a bit for the sun and as soon as we saw it, everyone can’t stop snapping photos to get a golden sunrise shot.  There were two other photographers waiting for the sunrise too (I assumed since they’re carrying SLR and tripod), and both of my buddies have one as well.  I, on the other hand (again) was trying hard to get a good shot with my 6 year old retiring 4MP HP digicam but I’m glad it did not let me down even if the screen was not working well.  Yes, I was taking photos blindly and thank God I got good ones I can share with you.

Surfers were up early too and it was also the town’s feast day, so we witnessed an early morning religious parade.  So cool to see my instructor Noel there, I didn’t actually but he called me out. 😀  Anyway, you’ll see more about what happened during our surf trip soon when I get the photos I will borrow from my buddy Leizel.