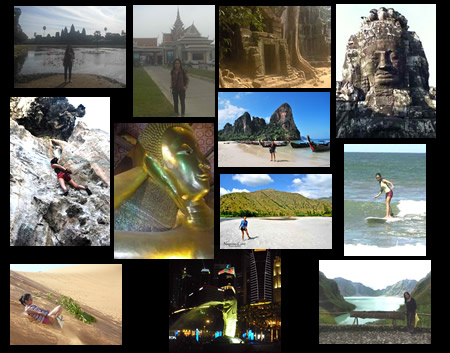 Last year was the busiest year for me as a backpacker. Well, the first quarter was the real backpacking solo and the rest are mostly flashpacks.  Either way, they were all exciting trips that I experienced. Every trip, road, tours, and steps I made, I get to meet new friends, learned a thing or two (sometimes more than expected), discovered a path or a new word, ate food I never thought I would, tried sports I always dreamed of doing, a lots of things to tell…  Those stories were shared here, some I have not posted yet but sooner or later they will all be here to be shared.

Now, here’s the round up trips I made last year that until now I can’t believe I made it alone (It was even more places I have been than the last backpacking I made 2008-2010). What a fulfillment!

I missed one local trip for December 13-18, 2011 to Vigan by the way, because I forgot to pay the ticket on time.  By next year, I have booked 3 flights , 1 Local and 2 International that I wish I don’t have to drop (because of my job, I dropped the Davao trip already for January 11-14, 2012). Gladly, when I talked to my awesome boss Cherryl, I was ecstatic when she understood my nature.  I promised her I will be back if that’s what she’s worrying about, and she said you better be or else… Hahaha! Isn’t she awesome? She is! She made my worries go away… Wohooooooooo! I can’t wait to start my 2012 adventure now. You can do the same, and believe me, it’s amazing!