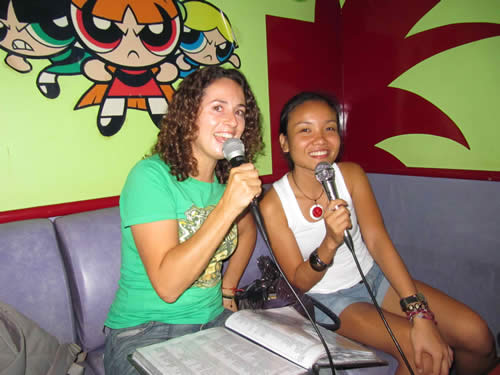 (Photo courtesy of Lisa Rippon:  That’s Amy and Me!)

One month after my backpacking trip were spent with just telling stories about the trip, contemplating about life then and after the trip, and planning other post backpacking activities with my friends I met during the trip.  It was March when I came back, and the whole April month was just that.

Not totally that boring because Nick came during the Lenten Season here, so the first leg of his Philippine trip was in Tarlac celebrating it, Ice Skating weekend with Leizel, and when Nick went to Donsol to swim with the dolphins and whale sharks, I went out with the girls for a Karaoke night.

I thought Lisa and Amy would not pursue their trip here in the Philippines, but then again they sent me a message on Facebook that they were around and would love to catch up.  I was so excited to meet them again, as the last time I saw them was back January in Cambodia (it was during the Ankor Wat Tour in Siem Reap).  Three months after, we met again in Manila!

I went to their hostel and chat a bit about here and there, we went to the nearest mall too which was Robinson’s Ermita but it’s closing when we came at 9pm.  We then decided to have a private concert night that only 3 of us can hear, so we went Music 21 around the corner.  From there, we started singing our hearts out with most silly and cool songs we can find at that song book they gave us.  It was really fun!  The girls love to sing and we went all musical that night!

It didn’t stop there, we went to a comedy bar after the karaoke and enjoyed the great performers on stage who sung amazing songs that night.  Amy conquered the stage too when she was asked to sing, and she did a great job there! Hands down to Amy! The Sexbomb dancers were there to perform an amazing number that wowed the crowd with their moves.  It was a night to remember with Lisa and Amy, we finished at 3 in the morning by the way.  Hope to see you again girls!