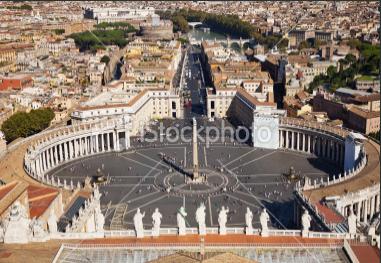 I always want to go and see The Vatican ever since I was in 6th grade, when the exclusive catholic school for girls I went to brought us to this exhibit of all the Vatican treasures.  I know there are all the Pope’s stuff, paintings, and sculptures but what fascinates me was Michelangelo’s “La Pieta”.

It fascinated me how everything on that statue were sculpted in details.  The veins, the drapes of the clothing, it was amazing.  I remember running my hand to feel it, I’m not that artistic(and I’m into performing artistry), and people who saw me thought I was fascinated as an artist.  What they don’t know was that, I’m fascinated that I’m touching a masterpiece of a popular artist that lived in Italy.  In my head, I thought, I’d see it closer again when I get to Italy (a traveler unrevealed).  Not that it happened when I was there the first time, but my first would not be my last because I will go back to Italy again.

“UPDATE: As of last night, we have a new pope from Argentina, Pope Francis I (photo above).”

Enough of my strange story like I am. So what is this happening to the Catholic Church?  The Vatican is still undecided, floating on who will replace the Popping Pope.  I say, “The Popping Pope” simply because he was the first pope I heard that resigned from being one.  For what reason? I don’t know the reason behind it or will not judge him for his reason why, but you have to admit, it’s shocking!  The whole world was shocked as they have announced that the Pope decided to resign from his post, it was not clear to me up until this time what is the reason.  Even after reading an article about it, it seems like its more of the politics in the church causes all this, with all the moral ethics of the Catholic priests all over the world.

Anyway, I never really believed all their homilies. I always question here and there.  Faith is more than just a religion, more than just words of the Pope or words written on the Bible or any sacred books there is known to man.  In my mind, it is always more than bigger than us that we can ever comprehend in one lifetime.

Still, all these scandals would not stop a traveler like me to travel there and see all the good stuff done from a a good motivation displayed in the sacred house.  I would still want to see where the faith I was brought up started.  The smallest country in the world, The Vatican.