Food is always part of it when going from places to places, and we all know that different places have different tastes, specialties, and even strange ones that we did not know can be edible until we went to a place where they eat it.

In Vietnam, they have scorpion and snake wines or liquors.  I was told that cats and dogs were eaten in Vietnam too (Philippines used to eat dogs until the government prohibit it, although I never heard any cats eaten here before).  In Thailand, they eat bugs, ants, scorpions, cockroaches, worms, etc. like chips and I tried eating grasshoppers after a little peer pressure from Doug (that sucks that Leizel got away with it!). In Cambodia, there’s a town known for harvesting good Tarantulas as delicacy and if only I wasn’t in transit for another 4 hours to Siem Reap I would have tried it.  Just because it looks like meatballs when cooked.  Anyway, so I did not try tarantula.

The Not So Good Food (a.k.a Strange Food) 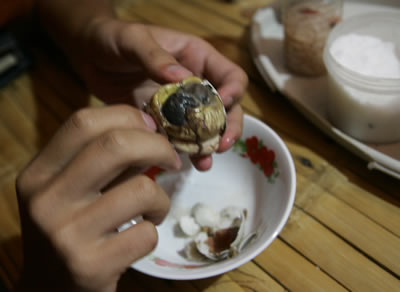 However, here in the Philippines we do have several strange exotic foods too.  The most famous of all is ‘Balut’.  Balut is a steamed duck’s egg that when you start peeling off the shell you will have to drink the soup in it first, peel the shell more to get to the baby duck, most of the time you will have full grown duck there that you have to eat all (TIP: do not bite it one by one or you’ll not gonna end up eating all of it.  It’s the food of the brave!), my favorite part is the yolk, although I don’t often eat ‘Balut’ myself.

What about the exotic barbecues we have here?  Grilled chicken intestines, head, chicken feet, blood (this one’s like brown jello), pig’s ear, intestines, gizzard, and liver.  Well, these are just the common street exotic barbecues that you can find everywhere.  They don’t look great, some tastes good, some not, but I tell you what, they are not good for your health! Really fatty and high in cholesterol.

We have lots of strange and exotic food that I could not write all of them here(would be best to experience and taste them yourself than reading it, this is just a little heads up).  Not only strange food we have, but we have good tasting ones as well and the foods I am writing about here are the ones our ever dearest Canadian friend Nick tasted, tried, encountered, and taken photos.  Let’s see what are the good ones he have had here.

Lechon is the coal roasted pig, served with the sweet liver sauce and I tell you now that it taste good!  Best part is the crunchy skin.  Nick says he loved it! (he should, lechons are served commonly on special occasions and not an everyday meal!)

Dinuguan is pig’s internal organs and meat, stewed in its blood.  It looks like a choco puree with bits of internal organs and meat in it.  I personally love it, although it depends on who cooked it, mom does it the best and Uncle Freddie.  Be careful where you get your dinuguan, it taste bad when they don’t know how to cook it.

Halo-halo means ‘mix-mix’, simply because its a mix of different sweetened ingredients such as beans, mongo, fruits like jack fruit, melon, nata de coco, buco, mango, banana, sweet potatoes, sago, jello, macapuno, crushed ice, milk, sugar, and purple yam plus leche flan on top of it.  You will have to mix it before eating them to get the full taste of all the ingredients in it.  Nick says this is his favorite of all and since he met this, every time he had a chance here to buy them, he would!

Well, you have a heads up on our few of the good and not so good ones to taste here.  Leizel and I had fun watching Nick try those and waiting for his reaction on those food.  Although, I think most of the time he’s just trying to be cool with what the eff was he eating!  Still, I’m proud of him passing the certification of having a Pinoy Taste after that.  This is not a joke, even my family and friends was surprised how Nick was so eager to try even the strange ones. Hurray to you Nick!!!