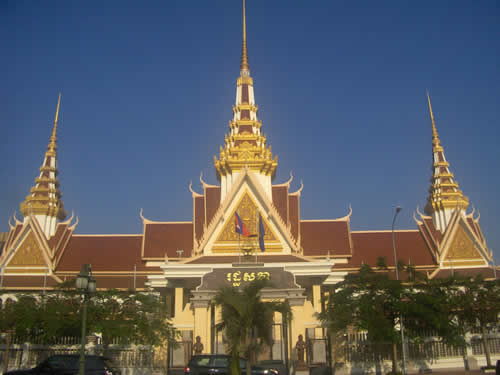 After a month of stay in Saigon chilling out, living a normal life looking for work, doing part time jobs, meeting cool locals, new friends, and a lot more, I decided to follow a friend to Thailand.  We set to meet up in Bangkok, Thailand and going there from Saigon I chose the option of going there by bus.

The border crossing sounds fun hey? Uhmm…well, it depends on your attitude.  It wasn’t easy but I take everything positive as I am carrying my luggage and a backpack having all the work clothes from Singapore!   guess you can imagine how embarrassing it is to border cross by bus dragging my luggage.  Embarrassing as it was, but honestly I didn’t care because I know it was not a planned trip, I am just lucky I thought.

I met new friends from that luggage though.  How?  Well, there were several backpackers who could not resist to ask how did I manage to get by with my tiny backpack, but then I told them about my luggage and the story behind it and that’s where the friendship begun.

Going back to the real story, going to Bangkok from Saigon which cost me $27 USD requires me to stay overnight in Phnom Penh (the guesthouse stay is not included in the $27) because the bus to Bangkok leaves 6am every morning.  Since I arrived 3pm in Phnom Penh, I took advantage of the time I have to see a little bit of the city.  I hired a bicycle for $2 a day and my fan room $6 USD with private toilet and shower.

So I went around the city, there were cool temples and landmarks that I took photo.  I did see the Chan Chaya Pavilion or Moonlight Pavilion which looks amazing, reminds me of Europe’s popular parks with doves, only this is the Asian version.  I tried to capture a good sunset photo with the Independent Monument and the Statue of Chuon Nath (Last Khmer Emperor).  Some newly constructed park that resembles Greek parks.

Cheap Food at The Park

Food is cheap around the area.  My guesthouse offers meal from $3 but around the parks there are local food vendors that offers way better servings of food at a cheaper price.  My lunch was a just a grilled corn cob seasoned with spices on the stick for 1000 real ($.25 USD) and got a frozen cola at the park for 3000 real($.75 USD) in a tall cup.  It was refreshing treat to have cycling under the sun.

While I was enjoying my frozen cola, I parked my bicycle at the town’s plaza and watch bunch of locals dancing at the middle of the park as their everyday work out.  It was cool watching them, and how that is similar to Vientiane (Laos) and Saigon’s (Vietnam) park every afternoon.

Dinner time, I went to walk around while my bicycle was parked to see what the locals are eating at those sidewalk cook-as-you-order places and saw one good fried noodles being prepared for one local customer.  I then asked the customer what is it called and what are they, he said it is just fried noodles with beef and vegetables for only 3000 real ($.75 USD).  That was a good deal I thought, so I ordered one too and a small bottle of water for 1000 real ($.25 USD).  It was so cool to have a $2 USD lunch and dinner!

It was dark after dinner, so I headed back to the guesthouse and had a shower, set my alarm at 5am for an early Tuk-Tuk ride to the bus station.  I know that my Phnom Penh trip was not very good because I did not get to see much of the city.  There’s not much to see there as I heard from fellow travellers, so I’ll head to Sihanoukville next time when I’m back in Cambodia.