After I landed at the Low Cost Carrier Terminal in Kuala Lumpur, I head straight to inquire about pre-paid sim card since I will be meeting my cousins and some friends. It was crazy at the airport, crowded I must say. It was 3pm and the heat and humidity was too much to handle. My first initiative was to get out of there, ASAP.

I assume there are a lot of travelers out there who would love to travel around this city as soon as they can. You might be asking or will be asking how to get around Kuala Lumpur.

FROM THE AIRPORT TO KL SENTRAL & AROUND THE CITY.

From Airport to KL Sentral: there are buses parked outside at the very far left when you exit the airport. You can buy tickets for 8RM, it takes an hour or 1.5 hour depending on the traffic flow.

The city have a FREE bus ride called “GO KL”, they are the purple colored with huge GO KL signs on both sides. This bus have 2 routes and divided it as GREEN & PURPLE line, operates from 6am to 11pm. The bus is also WiFi enabled, giving passengers not just a free ride but free WiFi access too, awesome! Check out the route map below.

Aside from the free ride, the public buses. Routes are determined by numbers, ask a local what bus number you should take and you can always ask the driver to drop you off at the nearest stop to your destination. TIP: Always carry smaller bills or coins with you to save time. 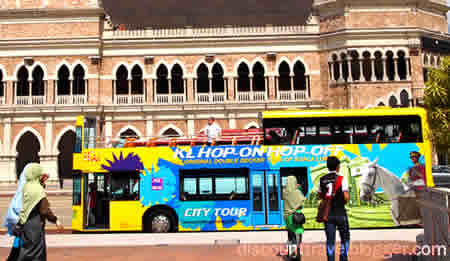 KL Hop-On Hop-Off Bus. This is an excursion buses if you want a DIY city tour. Their bus seats are up on top, open roof making you see everything freely and they would use headsets as well so you can hear the tour guide/driver. TIP: Buy your tickets at the museums and national heritage galleries that sells it, they sell it as cheap as 32RM. Also, from March to May don’t forget your sunscreen, hat or umbrella because the heat is unbearable.

Kuala Lumpur’s cheapest and easiest transport anywhere in the city. The train lines have different routes:

Check out the route where you are heading for at: http://www.myrapid.com.my/rail/routes

Although this is the easiest and comfortable way of going around the city, it is not a budget means of transport especially during peak hours where your meter can sky rocket or the drivers would want a fixed rate with ridiculous amount. The flag down rate is 2RM but changes after 12am up to 6am.

See, it wasn’t really hard to get around Kuala Lumpur. Going to the tourist attractions: KL Tower, Petronas Towers, and Batu Caves. You just have to learn how to ask for a map and read it. Be safe and always research first for your safety.