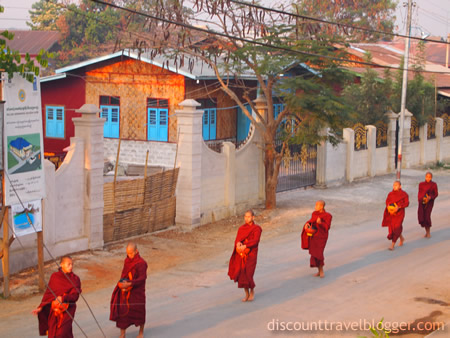 (Monks in the morning)

I actually enjoyed the dinner with random friends I met, like I met Lee (Korean guy in his 40’s)  from Bagan when we were waiting for the bus to Inle, his bus left 30 minutes earlier and I saw him early morning in Inle walking out of his guesthouse.  He helped me find my hostel since their guesthouse was full, the first night spent there was cool because he was going to meet up with friends he met on his travels for dinner that night and he signed me in to that too.

We waited outside his guesthouse and saw the British guy, and then the couple that the British guy met came,  the lady is from Switzerland and the guy is from Chile,  then they summoned the two French old women at their guesthouse which was just across the street.

It was one of the French ladies who suggested to eat at that outdoor local BBQ restaurant just beside my hostel.  We had fun talking about our differences and the ‘Usual Questions’, “Where are you from?”, “Where are you going next?”,  “How long have you been traveling?”, “How long will you be traveling?”, “What’s your name?”… You know how it goes.  Most of them ordered the big grilled fish which became a topic since the Swiss lady couldn’t eat it.  She said she’s not used eating fish with head and tail, so you can tell how she was so frustrated about it while her husband laughs. 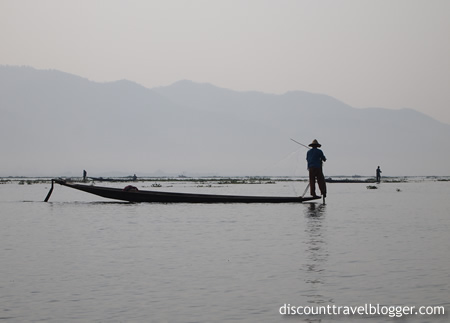 Then the British guy said, “They eat fish heads in Thailand!“ and I said, “In the Philippines we do too, actually if wasn’t too full I’d eat all your fish heads right now!” and so the British guy said “Oh yeah? So here it is!” and made a gesture to start collecting the fish heads.  “I said, if I wasn’t full!” and we all laughed.  However, they were all so cool to try and eat the fish heads and they loved it!  I love it when I meet random people who are fun like them, the 2 French old ladies were cool too and up for almost everything.  I wouldn’t judge people who have too much inhibitions but then again, the trip just gets more fun and alive with people who are easy going, those who are even up for trying anything at once.  We bid goodbyes at 11pm, I have to get up early the next day for the boat tour anyway but yes, almost all of us  had fun. 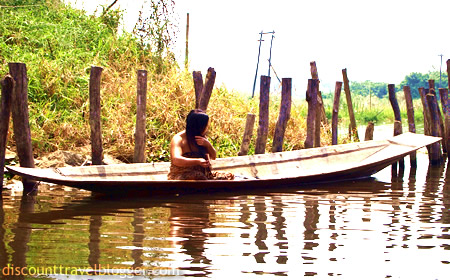 Day 2 and My Last Day at The Lake Town

It was awesome to have seen lots of monks lining up in the morning for the offerings of locals on my second and last day in Inle.  I was enjoying my breakfast and sunrise at the hostel’s balcony when all of a sudden a train of young monks paraded the street. I and my photography instincts couldn’t miss the chance, so immediately, when I spotted them from a afar I discreetly held up my camera aiming to nowhere trying to capture good shots that includes them and when no one’s aware. 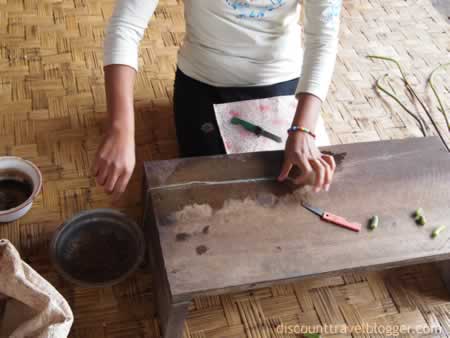 (Lotus stems processed manually for its sap to become thread)

Inle is popular for it’s leg-rowing fishermen and their nice big lake that was made a little interesting by their floating village.  Inle reminds me of Brunei, although Brunei’s floating village is a little bit better than Inle’s.

I must say, Inle Lake is huge and different.  We traveled almost an hour to where the floating shops were.  Along the way, we saw several high end floating hotels and resorts too which is cool if you have spare moolah to spend it there.  Honestly, I was expecting more from it because people were talking about it yet the boat man just dropped us off from souvenir shops to another.

Also, we didn’t have too much time because Lee (Korean) and I have to catch our bus schedule at 4pm which is why we needed to go back at 3pm.  The boat man used it as an alibi when I asked him to go to the highly recommended place of visit in Inle which is a bit further and will cost 3000 Kyat more.  My tour mates were up to it but no one wouldn’t want to argue with the boat man.  In short, we settled with wherever he brought us.  From the souvenir shops, market, cloth weaving place, tobacco making, jewelries, one big pagoda, and to our lunch place. 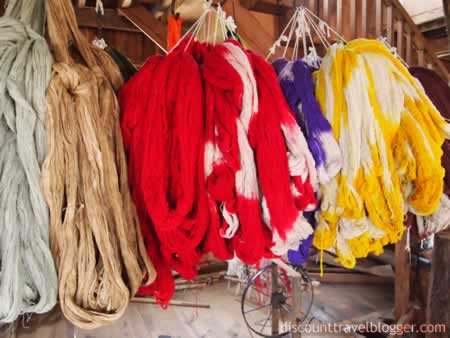 Of all those places, I like the cloth weaving place just because I found out that you can make a thread out of a Lotus stem.  I was surprised, I saw it with my own eyes how they do it and it’s pretty cool.  From cutting lotus stems in pieces, pulling it away and you’ll see the sap hanging out and they roll it sidewards producing a thicker and longer thread that will be processed (for coloring and refining).  They also have a huge clothing shop made from it too. 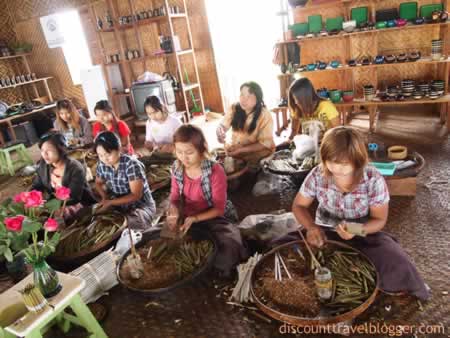 At the tobacco making place, it just nice watching them make tobacco and cigars, some are flavored and some not.  It’s kinda interesting but probably smokers will appreciate it more, you can try to smoke any of it if you wish.

Those are just the two that were interesting to me.  I didn’t see jumping cats, and they showed us one ‘long neck lady’ but she’s young which is why she doesn’t have longer neck than us, its just the same as ours and she was the only one as their ‘long neck’ in there.

Anyway, to cut the story short I didn’t really enjoy it.  I expected more because of the hype but it didn’t turn out to be what was expected.  You can rent the boat for a maximum of 6 passengers for 15000 Kyat, starting from 8am until sunset.  Try not to book your boat tour with Aquarius Inn.