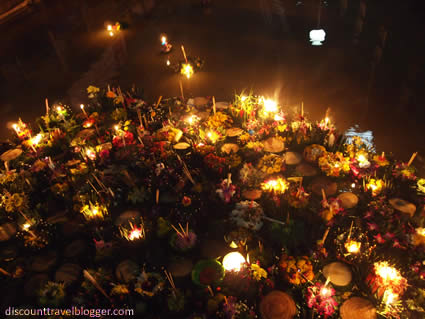 It was Wednesday, everywhere you go all the roads were empty.  We were told everyone is busy preparing for this Loi Krathong Festival, making their floating wreath-like boaties.  We thought it was over last 24th of November, but it turned out to be that it was the Yee Ping Festival in Chiang Mai that was celebrated, as they released hundreds of sky lanterns that lit up the skies wonderfully (according to the photos of friends that witnessed it).  I could have gone there if it was closer, but living in Southern Thailand, going to Northern Thailand for it would not be practical. 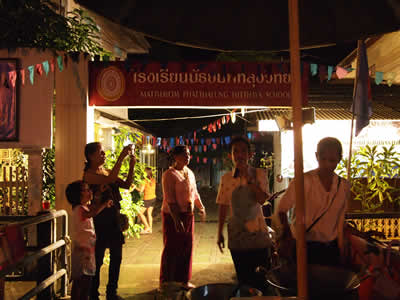 We planned riding motorbike to Lampam Beach with my friends and other co-teachers to celebrate and go for the dinner cruise, but then it rained so heavy that everyone didn’t want to do it anymore.  15 minute ride to Lampam under the rain became un-appealing  to everyone who planned it.  So Chris just cooked us amazing dinner as usual, I slept in early but woke up around 8.30pm hearing crazy motorbikes speeding here and there. 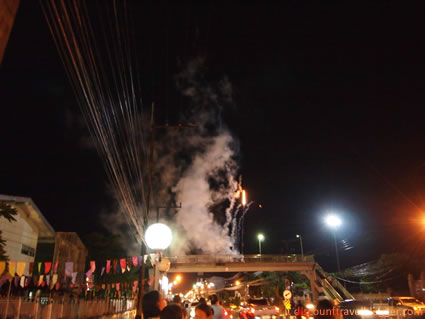 I looked outside and noticed that the rain stopped and locals were going crazy!  I was contemplating if I would just continue my sleep or head to the front of our school at least to witness the festival.  Mama (our sweet, nice, caring  Thai mama), told us that the river in front of the school near the hotel is also another place some people go to for their floaties. 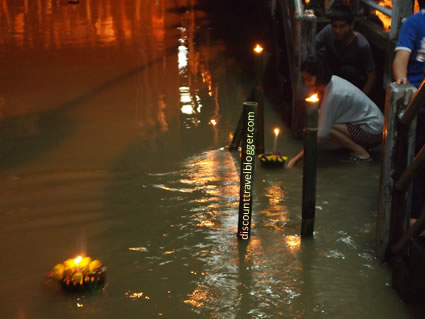 I took my camera and trot to the front of the school where there’s a huge canal connected to the river where the ‘ghetto’ version of Loi Krathong was happening.  I saw the Chinese fella, Arong,   all dressed up watching floaties at the other side of the canal.  I also saw some Thai teacher friends like Teacher Pitong there and found out that the preschool where the program was happening is his.  He tried to invite me over but I was just wearing flip flops, shorts, and shirt while everyone were ‘dressed to kill’. 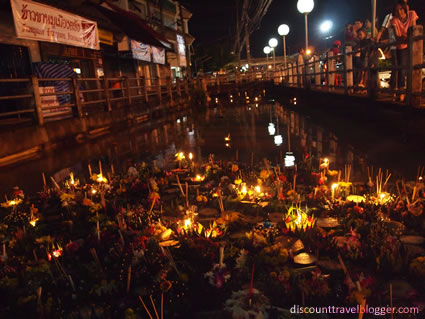 (Loi Krathong at the Canal)

Aside from the floaties, there were dodgy fireworks, couple of sky lanterns and a street that were so busy with people going here and there for the  celebration.  I’m just happy I took some photos of the festival floaties and didn’t miss it.  Good thing it stopped raining, or otherwise I would miss  this nice celebration definitely.

3 thoughts on “How I Celebrated Loi Krathong Festival”