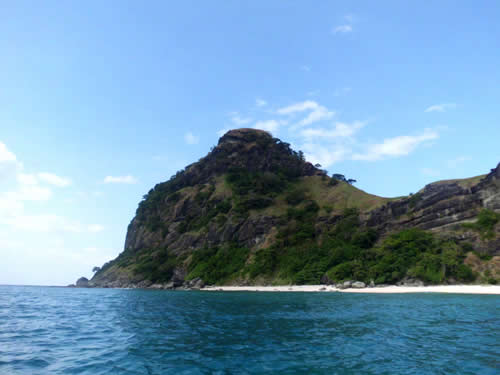 It was just from my ad on Facebook where I found some photos of Anawangin Cove, from there I started reading blogs about it.  They said, everything there is back to basics, that means no signal for your phone, no electricity, no toilet, no running water (just water pumps).  Meaning, its a campsite.  Hmmmm, I’m not a fan of camping since then but the paradise made me do it and take note, SOLO.

Well, like I always said, you’re really not alone when you travel solo.  I get to meet people like Warren, another solo traveller, and mountaineers Allen and Vianne (they were celebrating 1 year anniversary as a couple too! we didn’t know until I saw their uploads on Facebook entitled ‘1st Year Anniversary’).  They’re really cool company.  When I arrived in San Antonio with Warren (we met at the bus terminal), Allan’s brother (my contact to Anawangin) picked us up from the shed just in front of the Municipal Hall.  With the tricycle full of the stuff we will bring to the islands (woods for bonfire, kitchen utensils, mineral water, etc.) we went to Pundakit, the boat’s starting point.  There, I met Allan who is really polite and courteous to his guests.  We were actually 2 hours late to join the group that we are supposed to because the first trip to Pasay terminal was 5am, Allan said we should have gone to Caloocan terminal which has trips departing as early as 2am.  The bus trip takes about 4 hours from Manila to San Antonio, Zambales. 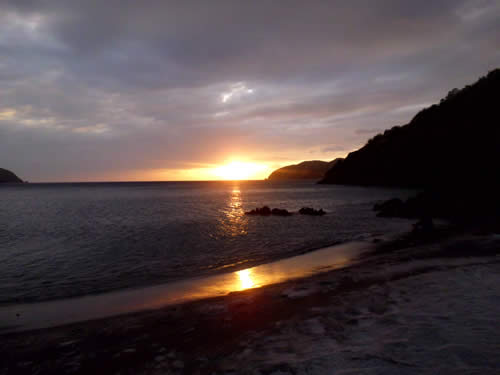 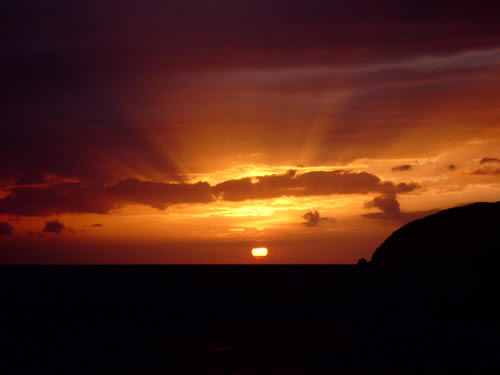 9.30am when we arrived.  At Pundakit, we met a cute couple, Allen and Vianne, both mountaineers who will be joining our group (there’s 4 of us in the little boat). The couple said, we were lucky because we were left behind by the group and they were about to go on their trip on their own (just the 2 of them), it just happened that their first boat stopped due to engine failure that made them have to go back at the start point and join us.

The itinerary for the day was supposed to be island hopping to Capones Island and trek to its light house, but since it was too wavy we did not get to trek the light house so we just took photos at the beach.  I don’t know what happened to visiting Camara Island, we went directly to Nagsasa Island.  Spent the night there and just like the trek to the light house, the trek to the mountain top was did not materialize for God knows what reason, I do not know.  Even the snorkels that was said to be included weren’t there (they’re there but they are asking for a fee, so confused with Allan’s package). Still the Nagsasa Island stay was cool, like the sunset that was said to be not visible from the island was there(at least something unexpected good happened) and so I started taking photos of it just like other photo enthusiasts looking for the best spot.  I took the cliff not much people dare to go (thanks to the skill Doug and Nick taught us from Railay Beach, Krabi, I’m a bit better with climbing stuff now), and I got couple of great sunset shots.  Then, I swam few hours just enjoying the view in the middle of the green mountainous cove. 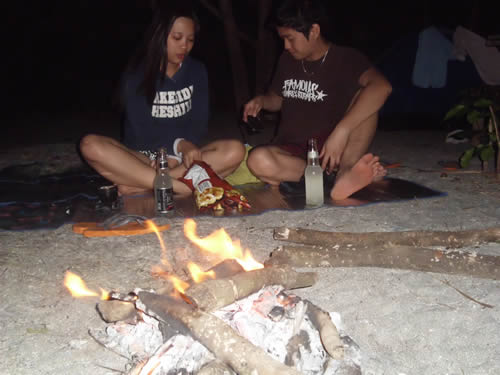 (Vianne and Allen enjoying the bonfire we set)

At night, we made a small bonfire, talked, bonded watching/taking photos of  those live crabs and snails playing around the area.  When everyone was tired, I laid my pashmina on the sand and stargazed for a while, the sky was so dark that made the stars stand out, I saw 3 falling stars that night and wished one same wish on the three (I wish it would come true).  You seldom see fireflies anymore but that night, we saw 2 or 3 of them flying and we were so happy to see them wishing they would multiply (they’re becoming instinct here).

The next day, I woke up at 7am but noticed everyone’s still asleep so I slept in a bit again.  Woke up at 9am, I just watched them people swim to a low tide water.  After breakfast, we packed our things ready for Anawangin Cove. 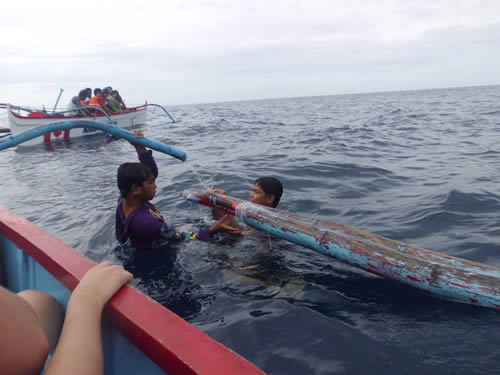 On our way to Anawangin Cove, the water was roughly wavy but our tiny boat seems like it knows what its doing, Yet suddenly, Vianne screamed and I felt the quick turn of the boat, out balanced as the right wing of the boat’s strings lashed out and it flew away from its fixed point.  I thought we will all fell over the water, good thing everyone has a presence of mind to lean at the left side to balance the boat (kudos to us!), if one person did a wrong move we would have fell into the water.

I wasn’t scared because we have life vests on, just got nervous how we might have fell, the islands are probably 30 minutes swim from where we are and it’s funny how’s everyone on the boat’s reaction(panic attack).  Allen was great to put his left foot up the boat (this helped us a lot to have maintained the balance), Vianne was confused of whether she’d stand up or jump into the water, I, on the other hand couldn’t stand to do what Allen did but I put my weight on my left to help balance the boat, I couldn’t see what Warren did because he was at the back but I’m sure its funny too!  Vianne felt sea sick after that, who wouldn’t feel sick after that stumble? Any kind of sickness you’ll feel just when it happened!

It was crazy!  The couple were drained after that, traumatized too I think, while I started taking photos and laughing how we were when it happened(while the boatmen were fixing the wing).  Lucky there was a boat nearby going home so they gave our boatmen a hand to fix the wing with their extra thick nylon strings. An hour later, we’re back heading to Anawangin Cove and we’re safe and securely landed on another paradise.