DAY 2:  I was up at 5.30am, had a breakfast and left going to the Ferry Terminal which was 10 minute walk from where I stayed, convenient yeah? Of course.  Heading to the ferry terminal, I noticed that there’s a jungle next to the road which was cool, reminds me of Subic somehow.  I bought some snacks at the Orange convenience store along the way, as well as toiletries that would be necessary when I arrive in Brunei because I didn’t get to buy it the first day. That was a long day for me coming out straight from work to Kota Kinabalu. 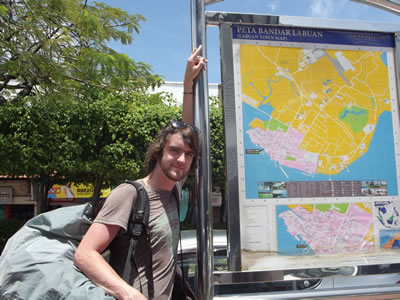 After I paid my ticket, I saw Jamie there. Since we were an hour early we have lots of time to take photos and do some chitchatting, making use of our time productively (if that’s even productive) before boarding the ferry to Labuan.  On board the very cold ferry I met other Filipino travelers, although I only talked to one, his name’sis ‘Kuya’ Albert, who according to him is based in Dubai and in a 3 month holiday in Brunei.

I did not see them at the Labuan-Brunei ferry for some reason.  From there onwards, I tagged along with Jamie who’s really cool and funny.  He seems so reserved and quiet at first (but don’t get fooled by that impression, he’s crazier than I thought).  I’ll write a post that is all about Jamie soon or maybe not(he gave me good excuse to just constantly change my mind by telling me the ‘women’s prerogative’, so deal with it, sir).

On Break from On Board

We had lunch, took photos, changed money in that more than an hour wait.  When we board the ferry to Brunei it was warm inside and smells gas as Jamie complained about it(even though he wished “I can’t wait to be warm again” from the other ferry, and his wish was immediately granted, hah!). Did the lucky charm started  its magical works from the money exchange in Labuan?

When we arrived in Brunei, I tried to get online for more details of Pusat Belia (the Youth Hostel that we will be staying).  Again, Jamie was going there too but none of us knows the exact address so we decided just ‘wing it’.  Team Lyndsay was brewing then until Jamie officially named that mission to me, just because talking to fellow Filipinos to ask direction and other information became really useful. It started with ‘Kuya’ Allan who asked if I’m Filipino and I started interviewing him about useful tips in the city(anything I could think of that will be useful during my stay in Brunei).  He said he knows where Pusat Belia is so he just dropped us off the corner where we walked a very short distance to the hostel. 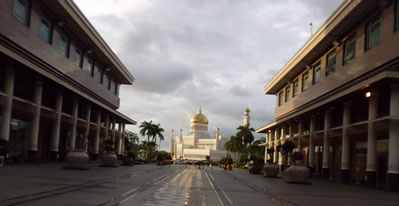 (Omar Ali Saifuddin Mosque in between the Yayasang Building)

Soon enough we were there, took a quick shower and went to the center to find something that will make our guts happy. We walked around to find some money changer again, we found one at the somewhat Filipino mall (it’s like Lucky Plaza in Singapore but smaller and dodgier).  I asked the lady where to find cheap food places around and pointed us to Yayasang Building, their proper mall.  The mall’s got Jollibee and KFC but just before we get to the mall as she said it would take ages away, we found one Nasi Ayam (Chicken Rice) place that sells it for B$1 (PHP 35), cheapest meal in Brunei.  We did not know the lady was just being sarcastic, the Yayasang building was just across the road and we’re full enough to handle another meal.

Anyway, we found it and walked around to see what food they have to offer in what price.  Average meal there was B$3-10 meals, varieties ranging from rice, noodles, and soups(what more can be Asian). A little bit tired from the ferry trip but can’t waste the day in Brunei, Jamie and I went to see Sultan Omar Ali Saifuddin Mosque which was just around the corner.  3 girls approached us to take their photos  and were kind enough to take ours back. 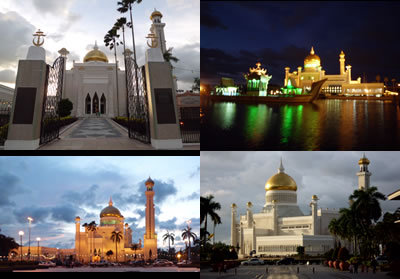 We waited until it gets a little darker, I told Jamie how beautiful the mosque is at night when its lit up according to Google photos so I wanted to get my own eyes to see and my lens to capture it. He won on getting the most best shots, well he’s got a better camera(I’ve got lots of excuses, sorry).

Tired from the trip and unadjusted sleeping time we came back to the hostel at 8pm, and to my surprise the 3 girls we met at the mosque were my roommates, Kaite (Aussie), Lynn and Koo Yin (Malaysia) who were getting ready to drive around and see Istana Nurul Iman, the largest royal residence in the world at 200,000 meter squared (3 times larger than the Buckingham Palace they say). 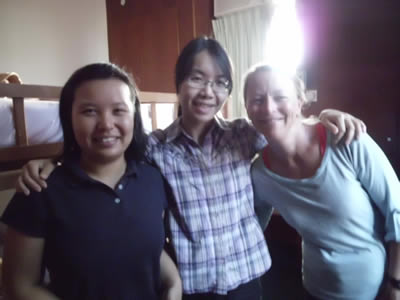 Contemplating if I should go or not, I ended up going.  I tried to yell out the male’s dorm for Jamie but he doesn’t seem to hear me so I assumed he’s asleep (he went out to get some water he said the next day when I told him about the girl’s night out). I’m half asleep during  that mosque trip with the girls, but that ends my first day in Brunei (Day 2 of the trip).