(They call it ‘Red Sad Dunes’)

Living in Vietnam for more than a year around 2007 or 2008 (I don’t remember the exact year) did not made me interested visiting the place or maybe I was psyched out that it was not worth going to and since I was living in a beach town (which I love, because I’m near the beach) called Nha Trang,  it did not matter to me.

This year, when I stayed in Vietnam by myself for a little while for some extra jobs and chilling out all together, a local friend Trang, who is working in a Travel Agency invited me to come with her since she wanted to relax in Mui Ne for a weekend.  I could not say ‘yes’ soon because I have to weigh things going on around me.  Well, to make the story short I went with her.

(Riding at the beach)

Saturday afternoon when we head to Mui Ne after her work at 3PM (they do have different bus times going to Mui Ne).  Since she works at a Travel agency, we got the best deal for the bus ticket from Saigon to Mui Ne which normally costs 140,000 VND ($6.5 USD) for one way, you can get cheaper if you know how to bargain it down.  It was a 6 hour bus ride (including breaks), we arrived at 9PM as the bus dropped us off the front of Duy Anh guesthouse which Trang knows too (and again, we got a good deal) that normally charges $15 USD/ night for a twin room with air-con, WiFi, private toilet, hot and cold water, cable TV, and fridge.  The people were so friendly and nice, although the guesthouse was way out of the center still did not matter having a motorbike.

So, we rent a motorbike for 24 hours at $5 USD and that’s the normal price.  We rode the moto to the center which was great and found an open air seafood restaurant beside the beach.  It was late, 10.30PM when we got there so they were almost packing but since Trang knows the owner, we were allowed to stay up to 1 am.

Dinner Beside The Beach with Cool Sea Breeze…Ahhh-mazing!

We had great seafood dinner consisting of sauteed spinach, grilled prawns, squids (vinegary cooked), and sauteed noodles with veggies!  It was all for FREE, Trang’s friend’s treat! Really delicious dishes, cool breeze from the sea next to us, and the feel of nature all at once was truly unforgettable.  Since it was late and we were tired from a long ride, we could not do a lot for that night so we called it a night after the late dinner.

The next day, I woke up at 5AM knowing that we don’t have enough time I wanted to enjoy the Mui Ne.  Took a cup of Vietnamese Black coffee since Trang was still asleep, took some photos and all.  Trang woke up at 7AM and we were on the road at 7:30AM riding the motorbike. 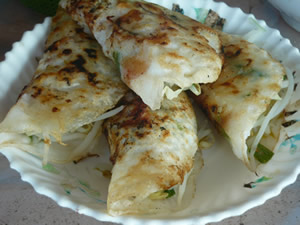 We stopped at the street to eat some breakfast and that was the most yummiest breakfast I ever had.  We had ‘Banxeo’, it was a rice crepes with vegetables and few slices of your choice of chicken, pork, beef, or seafood.  Served with pale vinegar and chilis, plus Trang ordered a small bowl of noodle soup which they call ‘Pho’.

After breakfast, we went to see the beach and took some photos but we decided to go to the sand dunes first before swimming.  So after few photo shoots we went to the area, we were early so there were not so many tourists yet.  As soon as my feet felt the sands, I could not explain how wonderful I felt!  They were so fine and brilliant!  I took off my flip flops and started walking bare foot, it was one of the happiest moment I have!

Kids started encircling us and hassling us to get their service to slide through the sands, I was not really interested as I was just happy running around and feeling the sand on my feet but as soon as I saw the Korean couple did it, I was intrigued how it would be like doing it too.

I asked Trang and she asked one kid in Vietnamese how much it was?  The kid replied 20,000 VND for several slides (how many you want) ($ 1 USD), surprised how much it costs I said ‘yes’ and did it 5 times!  The kid’s name was Kup, she’s 12 years old but she stands like a 7 years old little girl, she was so tiny but she was the first Vietnamese kid (or even from the adults) I have heard to speak real fluent English! It is so hard to find local people that speaks real good English, but Kup was amazing! She even have this little Bristish twang which surprise me (that deserve a tip).  She said she stopped schooling to help their family, story that is sad but common in most Asian countries. She can passed the smartness of Cambodian kids I’ve met in Siem Reap (Cambodian kids are wonderfully smart, I’m not kidding! Some kids speaks 7 languages fluently).

Anyway, so the sand was awesome!  I was told that there is a white sand dunes but it is quite further than the red sand dunes that we were in.  Stayed there for quite a while just sliding and running, climbing, walking around the sand (Imagining I was travelling Sahara Dessert).  I don’t know if most of you will enjoy it because it was just sands, but I did, I absolutely did!

Then we headed to the beach, the area where Trang wants to be was really crowded with local tourists but there were long beach areas there which I don’t understand why they all want to stay at one place.  I asked Trang if we could just go back to where we took photos (it was quiet there), we tried but we can’t find it.  We ended up swimming at the beach just right next to our guesthouse (Yes! I did not know there’s a beach just across the road, behind the house in front of our guesthouse!).  If I only knew, I could have swam my there while waiting for her to wake up that morning! hahaha!

Oh well, we still swam and swam for an hour and a half (it wasn’t enough for me) but we have to leave at 1:30PM that was why we did not have enough time to swim.  We tried moving it for the next day, but it was so busy that there were fully booked out. No chance to stay longer than 1 day, Trang needs to work next day afternoon too.  I was thinking to stay but I don’t want to leave her alone.  So that was where and when our Mui Ne trip ended. Back to Saigon.