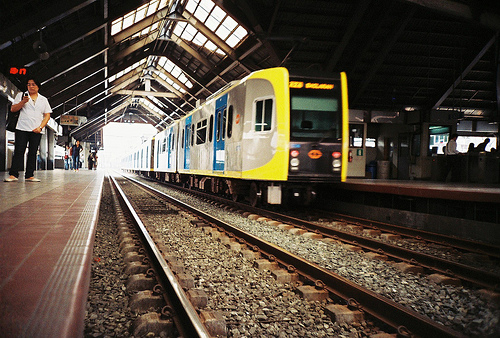 Besides Philippine Jeepneys that are not immune to the heavy traffic and exposing passengers to the pollution (because most jeepneys have open door and windows), there are other means to get around Manila like trains.

Metro trains like MRT (Metro Rail Transit), LRTs (Light Rail Transit) 1 and 2, are the next convenient to use as public transportation.  The 3 are interconnected to make it easier to the people going to and from the biggest cities of Metro Manila such as Makati, Pasay, Caloocan, and Quezon City.

The fare price varies upon the destination;

All the trains have air condition, although it has the most crowded trains I have ever been on in Southeast Asia so be ready :D.  Trains also have the first front train allocated only for senior citizens, pregnant women, people with kids, and the next cut are for women.  Men are segregated to protect women from being harassed during rush hour.  Although, couples have choice on whether to be segregated or the female will go with the male partner at the men’s section.

NOTE: If you are carrying a luggage or a backpack, it is not advisable to use the trains.  It gets so crowded that will be a problem to get out to people carrying huge packages. Take a taxi instead.