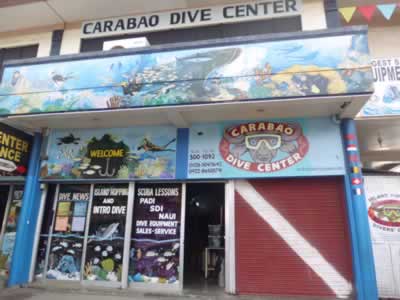 The night before Day 2 in Davao, I texted my cousin Dei, asked her what are their itinerary for the day since the dive center people called me and said there will be no diving on my Day 2 due to the windy weather, no charter boats were going.  It was 11:30pm when I texted her, she said they will go to Samal Island, it’s beach day for them on our Day 2 but they would have to get up at 4am.  I know I wouldn’t make it, so I said, I’ll text her in the morning if I managed to get up that early or if I can follow them there if plans wouldn’t change.

DAY 2, 8AM when I woke up, had a shower, and went ready to have a breakfast.  To my surprise, I saw Dei downstairs at the ATM machine just beside our dormitel, she said they just had breakfast and just going to the Ferry Terminal to Samal Island.  I told her, I will have my breakfast first and if they’re still around I’d go with them.  When I finished having breakky at ‘Nitini’s’, I didn’t see them around so I decided to go and drop by the Carabao Dive Center to ask personally about the diving and if there will be a scheduled dive before I leave Davao.  From Nitini’s (which is just in front of the dormitel) I rode a jeepney (Php 8) going to Jacinto and asked the driver to please drop me off Magsaysay Park. 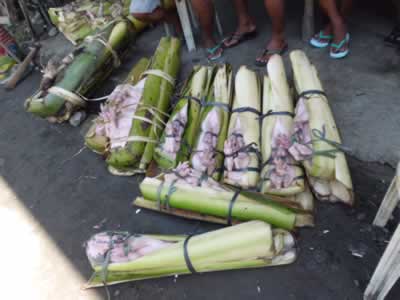 Magsaysay Park is filled with fruit stands, its their fruit market and majority of the stalls were selling Durians and Pomelos (Davao is popular for best grown for those fruits).  From the park, I asked locals where the dive center is and succeeded finding it. At the center, I talked to John, the shop’s manager.  He said, “I think you’re the one I called yesterday”, I asked if he’s John and he said, yes.  John said, there’s no dive scheduled for today but probably tomorrow there will be and will text me later that day to confirm.

I checked my notes of researched routes going to Maa and from the center I took a ‘trike’ (bicycle with passenger seat) for Php10 to the next street where jeepneys going to Maa passes by, you can walk there by the way, its just that the old guy needed to earn for the day, Php10 isn’t much to help him out.  From that street, I took a jeepney going to Maa and it cost Php14.  I asked the driver to drop me off Carlos P. Garcia Highway corner Diversion Road which is more popular as Phoenix Road. From Phoenix Road I went to a police outpost to ask directions going to the Zip City at the Hill Top, he told me to go straight to Diversion Road and when I see a surplus shop I should turn right and then there’s another road to turn left.  I thanked him and left. 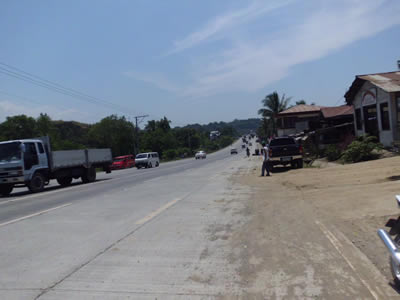 I started walking to the direction he said.  For about 5-10 minutes under the heat of the desert-like Diversion Road, I tried asking a local about directions again, she doesn’t speak Tagalog (Davao has their own dialect, ‘Bisaya’) so I assumed I’m near.  I walked further and saw a family, I tried to ask them again where ZipCity is and she said(luckily in Tagalog) it’s far and I couldn’t walk it, I should ride a motorbike and most of the riders are parked at the Phoenix Road! 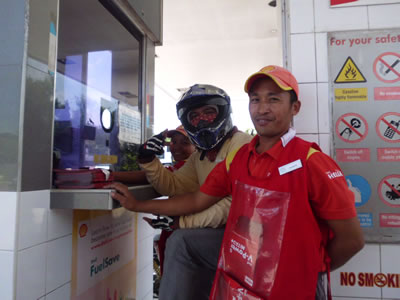 Waiting for a Ride at the Shell Station

Surprised to that information she just said, I asked if I could get a ride near since I have walked a kilometer already, she told me just wait at the Shell gasoline station that I just passed by and maybe wait until a rider loads their ride some gas.  I hung out with the service personnel, they were nice enough to offer me a seat and answered all my questions of my possible next destinations like Crocodile Park and Gap Farm that are on the same way where I’m going (I didn’t end up going to the Gap Farm).  Even if they are having a hard time to speak in Tagalog, they tried really hard to make me understand. Davao locals are amazing! 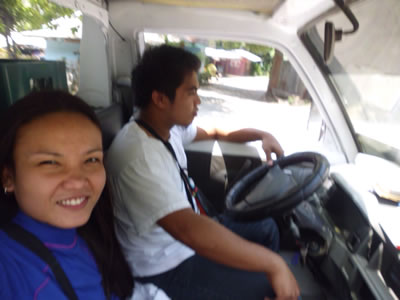 (Vergel giving me a free service from the gasoline station)

Then there came one rider going to the same direction I’m heading, they asked him to give me a ride up to the hilltop, since he’s their friend he wouldn’t want to charge me for the ride.  I was already thankful for him when Crocodile Park’s service stopped to refuel the service, we were still talking about the ride when the driver of the Crocodile Park’s service asked where I’m going.  They told him I’m going to Zip City and he said, he is going there himself to drop off deliveries and offered me a ride too!  I thanked the rider and they were happy to just helped me get a ride, and so we go! 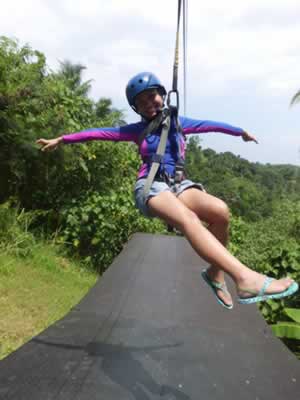 It was lunch time when I arrived at the Zip City,  Sarah, one of the staff told me the guys will be back at 1PM but if  I want, I could pay the Php300 (less than $8USD) zip-line fee and since it includes Php100 consumable food and drinks at their restaurant Dencio’s, I could eat there while waiting, which is what I did.  The Zip City zip-line didn’t impress me much just because I’ve done the free fall first before I did this.  So after the boring zip line, I hitched Vergel’s service again going to Crocodile Park. 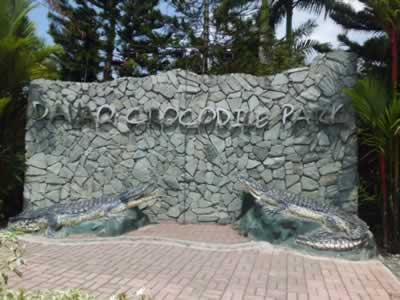 Vergel told me that at the Crocodile Park, they have a package of Php150(Less than $4USD) that include the entrance to Crocodile Park, Tribu K’Mindanawan, and Butterfly House.  I thought, that’s not bad but I didn’t expect I’d get in FREE on all three!  Vergel said, he mentioned to his manager how he met me and how I was walking under the heat of the sun from Phoenix Road going to the Zip City.  He said his manager was nice enough to compensate my effort to go there by giving me a free pass to all three places that were all connected to Zip City, you can read the story at Visiting Davao Crocodile Farm. 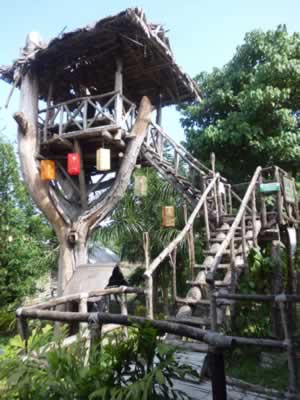 (A tree house as you enter in Tribu)

There was also an Air Soft Battlefield and Zorv areas, not to mention their Maxima Resort that offers water sports and activities on a very affordable prices.  Just beside the Crocodile Farm were Tribu K’Mindanawan and Butterfly House located.  Over all the experience were truly amazing.  What more can I ask for?

Even though I didn’t wanna go back to the hostel yet because the guys are offering me to try Air Soft, Zorv, and Maxima for free as well. I know I have to go because Net was waiting.

Net, Seng and I went out together for dinner, a walk to the park, durian eating marathon (just for them), and videoke!  It was a fun night with the girls too.  As much as we would like to extend the night, we have to end it because we have to get up early for the dive next day.  Hang on for the next posts about the scuba diving trip we had.

4 thoughts on “Free Adventures, What More Can I Ask For?”