I have never been to China to see the Forbidden City.  Forbidden City is the home of their royal bloods and their households, judging from the photos, Vietnamese in Hue province where Forbidden Purple City (the smaller replica of Forbidden City) did a great job immitating China’s one.  Too bad, I didn’t take a good comparison shot. Apology to all, it was my very first backpacking in Southeast Asia (2008-2010) when everything was so overwhelming, don’t even know what to blog about.  All I care then was to see as much as I could, and eat every food they have!

I am not sure now, if I want to see China’s Forbidden City, a colleague who have seen it says it is huge and the Hue version is not as huge but got me really tired touring around it. 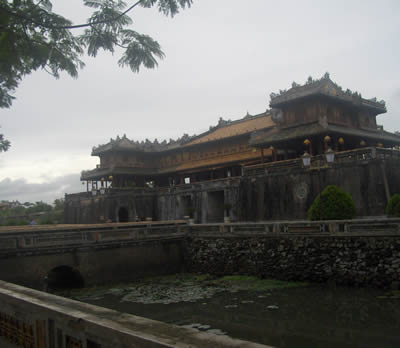 (Entrance of The Forbidden Purple City, Note: There’s an entrance fee that I forgot now how much but its cheap)

Forbidden Purple City is the only spot to visit in Hue, Vietnam (not to mention they have good cheap food and hotels there too, in case one spot won’t motivate you).  Going in the Forbidden Purple City was amazing, I was overwhelmed by the Chinese culture like I started imagining living in that place during the era where the empress and emperors were still living in the city. 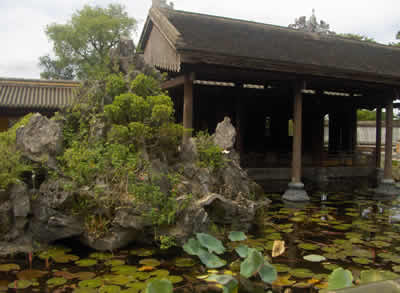 (The Empress’ Place I’m talking about)

I can still feel the spirit of them lingering around, why not?  The place is so serene, every children of the emperor has their own tiny village and each one has its own signature personality, its so quiet and peaceful there.  The garden was amazing,  I forgot the empress’ name who lived there, but it was simple house (like an old school Filipino house with Capiz windows and dark brown wooden walls with a man made river just outside.  The simplicity of the style is such an amazing looking hang out of a female royale, I stayed there to rest for a bit and it calms me down, that place.  My skills in photography was worse than I am now, so please bear with the old photos I have here, they were taken 2008 and I don’t have a lot. 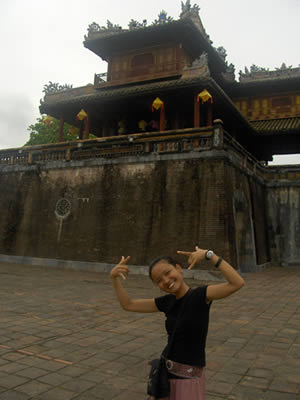 I want o go China one day, but I think I’ll skip Forbidden City for that matter.  China’s the biggest nation anyway, I’m sure there are other places to choose from like Ghuangzhou, Shanghai, etc.

Tokyo in Less Than 24 Hours