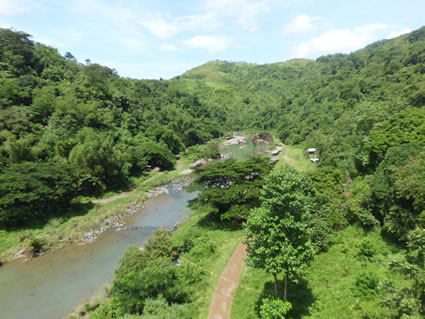 July 14, 2012- Finally, the immediate adventure that was planned less than two weeks has happened.  I initiated the activity advertising it on my blog and Facebook page, and because Marc, the organizer/owner of the event, told me I have to secure 10 people to get this activity saved, I did (only 4 of them didn’t make it or they have other more important things to do) and we got the ball rolling. 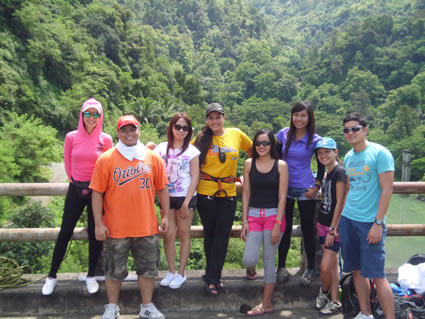 Meeting New Friends at the Meet Up Place

4.00am- Me, Aissa, and Arjun (my siblings) we were already on the road to LRT2.  We had our breakfast at the nearest Jollibee fast food chain around LRT2 Recto Station, and by 5.30am we were at the meet up place, Jollibee Farmers Cubao.  We waited for everyone to arrive, I saw Marc and SC.  Then, Grace came in before 7am. She Ann came before Grace though and then Jay with Tin called me saying they’re already outside.  One of them was left behind because they’re running late to the meet up place.

I went out and told them to just wait a bit since they can’t park their car outside unattended, and tried calling Berna and her bf, who were also participants in the activity.  Berna answered the phone saying she just woke up and they won’t probably join the activity.  Clof backed out 2 days earlier. So, I told Marc we can leave. 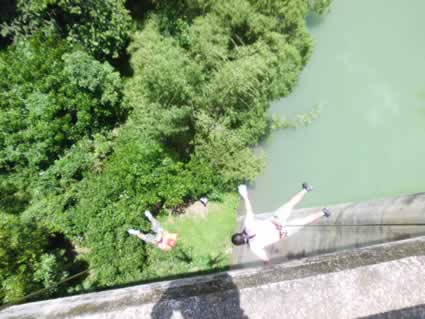 (Jay and Big Balls Adrian on a Mission Impossible)

Luckily Jeff, one of Marc’s crew, came with a van and I asked him that Jay would follow his lead to the venue.  All aboard the bus we ride!  From there, we rode an ordinary bus (no AC) going to Sapang Palay, told the bus conductor that we are headed to ‘Road One’ and paid Php45 (less than a $1 USD) for an hour and a half ride.  From ‘Road One’ we hired a jeepney to BitBit Bridge costing us Php120 each (just a li’l over than $2 USD) back and forth ride to Bitbit to Road One.  Doing it alone, you’ll pay Php 8 for a jeep ride and a tricycle to Bitbit Bridge for Php200 (just over $4 USD) one way, so if you’re late it would cost you more (but better than missing the opportunity). 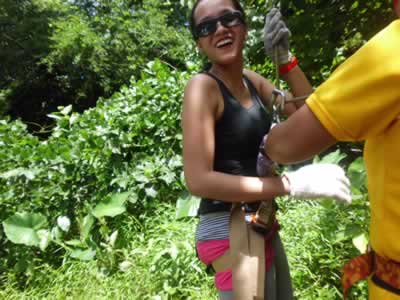 (Aissa after her first  Swiss Rappel)

“How to Save Your Own Life” – Marc

Since there are only 8 of us, not including the crew (there are 4 of them; SC, Marc, Jeff, and Vic [there you go, Vic!]) Jeff and the crew started preparing the equipments.  Soon enough, Marc started his brief orientation and safety precautions.  It was really hot and humid day, and after the orientation he decided to make the first register, first jump policy which of course left me with no choice since I was the first registrant. 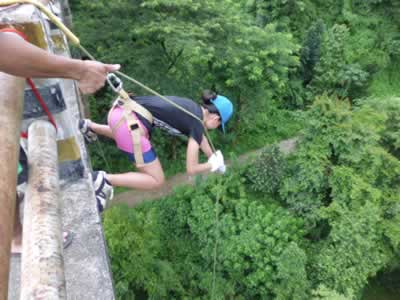 The first activity was Swiss Rappel, it is the usual face up-lean back/ sitting down rappel, it wasn’t as hard for me because I’ve done my first rappel back in High School Leadership Camp and several times in Krabi with Team Canada and Leizel. Although its a li’l different doing it from the bridge because its less the rock to lean on with your feet, it’s actually more fun because you get to see the view around it fully while you’re rappelling.  I watched how my brother Arjun and sister Aissa did it, and I’m a proud sister that they did it with flying colors! 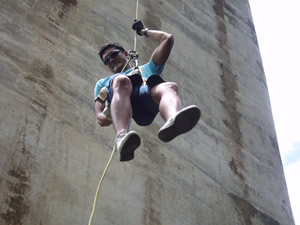 I was actually enjoying the activity with my siblings, it was the first bonding moments we have and I’m glad they both went with me.  They said they enjoyed it too and actually wanting to join other activities even without me!

Adrian, 3rd time participant on this event did the free fall on his first try. While we were still gearing up for the Aussie Rappel, this is the face down rappel, somewhat like free fall but you’re controlling the rope for your fall.  I saw how Adrian trembled when he lift himself to the other side of the bride for the free fall jump.  Free fall is where the belayers are the one in control, you will not hold the rope and will give you a real falling sensation releasing the rope and leaving you being naturally pulled down by the gravity.  What a brave soul, I thought, but then again, I would have to be brave later on to try it. That was what the purpose of this activity. 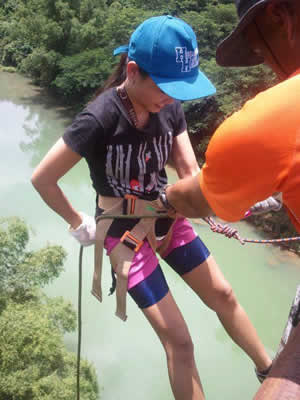 It was my first time to Aussie Rappel, and unlike Swiss Rappel that was facing up, it’s totally a different feeling when you’re facing down seeing how high you can fall when you released the rope you’re controlling.  Jumping at the other side of the bridge and slowly preparing yourself for the Aussie Rappel makes me somewhat hesitant to do it.  Marc said I just have to let go a bit to go down and clear myself from the beam of the lower bridge, I heard Marc left me hanging alone there saying “LA(my nickname) can do it on her own” and judging from the sound of his voice he’s assisting Grace at the other rope already so I’m stuck there. I don’t know what to do!  The grip of the harness on my gut was getting tighter and I feel like I’m starting to freak out why the hell I’m not falling when I have loosen the grip of my rope! I shouted “Why am I not falling?!” and Vic instructed “Feed the rope so you’d glide and start falling!”. I did, and so I felt the gravity starts working.  My glide down was quite fun while I’m figuring out the release and grip of the rope for a better fall.

I trek the road back to the bridge again and waited for everyone to finish their Aussie Rappel try.  We were all exhausted and starving from the activity and the hike back up to the bridge everytime.  Marc announces “Lunch Time!” and just after having lunch the rain poured down, we loved it! Because it was so freakin’ hot doing all these energy draining, nerve wracking adventure, we enjoyed the great shower of the day!

Jay, tried only Swiss Rappel and wouldn’t want to try another after the first one. He’s drained from no sleep (it was his birthday the night before the event and was inviting me over at 12am!!!) driving there and back, plus they have an event at their work that night too! Wow! Superpeople!  Tin encouraged Jay to try another one before they leave (they need to leave early for their event) and I second the notion asking Jay for another stunt.  He did, and the second time around he enjoyed it better. 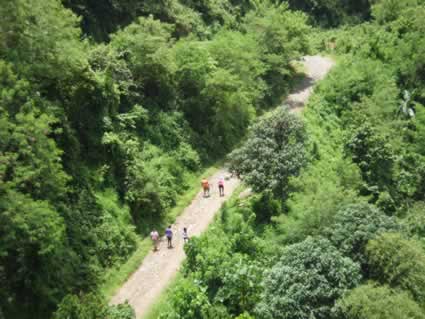 (Do you know where you’re going to?)

Tin was so brave to be the first to volunteer for the free fall after lunch (Adrian’s a veteran, Tin’s not, she’s a noob so I think she’s got balls!).  Although it took her time to finally let go of the rope (who didn’t take time to?), it was a successful jump! Wohooo!  Jay and Tin, left after that.  I’m so glad they enjoyed it. Jay and Tin, Thanks for joining! See you again somewhere, someday!  Last time I saw Jay was back when I was working in Singapore, they were bunch of property agents lived in the hostel I was living that time, Footprints Hostel, lots of good memories there.  Tin is Jay’s colleague.

She Ann took the next plunge, and then Grace, and then myself.  It was fun watching the jumpers’ different reactions just to cope up with the fear.  Grace and Arjun were the funny reactors as far as I have seen ( Of course, I didn’t see my own reaction).  Grace, wouldn’t stop saying graceful “Ayy, ayy, ayyy…”  on every drop she made(she’s not screaming!!! she lived by her name by shouting gracefully! OMG!). Yet, my brother was the funniest.  Imagine how a 6 footer hunk kept shouting and screaming “Wait! Wait! I’m not ready yet!”, and when he’s finally ready to let go he closed his eyes and turned his head to his right, started shouting “Waaaaaaaaaahh!” even without loosening the rope yet for the fall, waving his stretched arms (you have to stretch your arms when you’re ready to indicate it to the belayers) like a big bird flapping its wings! (hahahaha! can’t help laughing until now whenever I remember)  Too bad camera’s battery died. Aissa on the other hand started nagging every crew when they mess around with her, that she was the one wanting to do the stunt(haha!).  She’s the only one with video recorded, I’ll post it here once the video is on YouTube. Like I said, I’m proud of them not backing out from any stunts they can try, especially Arjun whom we always thought a chicken! He’s not a chicken anymore, he’s a big bird now! He wasn’t that time his balls grew enormously! Wohoooooooooooo! You’re the man now, Arjun!

Grace’s free fall according to SC and Marc was funny because she cried. They asked Grace as soon as she landed how is it? and she replied “Awesome!” but walked pass them covering her cries.  I was at the bridge then, but I saw her walked passed the two from up there.

Adrian was a big guy with big balls, he tried the Lizard Rappel and She Ann wanted to try it too but then she could not turn upside down for it so she ended up doing Swiss instead.  Lizard Rappel, is an upside down free fall I didn’t get to try because I changed footwear to sandals.  Foot grip is necessary for it (I thought I have Adrian’s shot on a Lizard, turned out I didn’t. 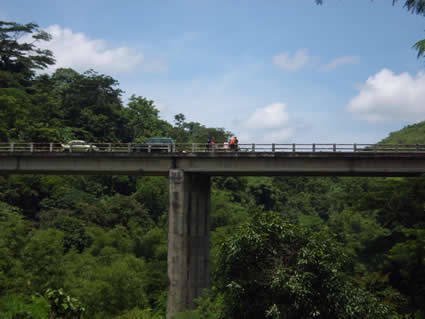 Freshen Up to Take a Bow

After everyone’s done, we head to the river below and swam a bit to freshen up before going home.  It was just me and Aissa who swam at the deeper part of the river where bunch of male teenagers jumping off a rock’s cliff where it says “No Jumping or Diving!”.  Me and Aissa were messing around when they all climb up, I was shouting at them how ‘macho’ they are! and reading the sign aloud “No Jumping or Diving!” while I laugh.  One replied “Walang bawal dito, ate!” (No prohibitions here!!! Ate [n.Ah-teh], is a courtesy call to female older than the person talking).

There was no changing cubicles so we changed using our towels.  Succeeded.  We head back up to the bridge and went home altogether.  I’m happy that everyone enjoyed the adventure and very much thankful to Marc and his crew(SC, Jeff, and the other guy) who have made our adventure lives that day possible!  I wished I knew them earlier because I wanna join the Free Fall in Bataan, which is the highest free fall ever 35 floors high! I wanna do that when I’m back!

Watch my sister’s video that was the only one recorded!