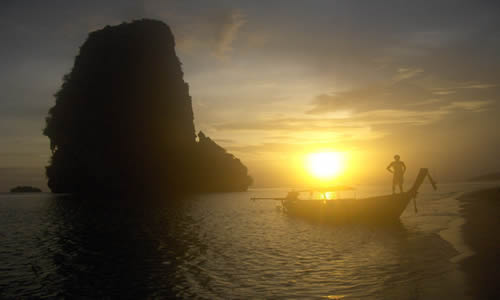 I have not seen a place better than Krabi so far, beats my previous number one favorite place, Santorini, Greece.  Although, I have not experienced sunsets and sunrises, or any activities in Santorini (stayed just few hours when I was working on a cruise ship), I’ll keep it on stand by number 2.  I am very much thankful of Leizel, my travel buddy I met in Saigon, while we were both travelling solo, for picking Krabi as the place we should see before the end of her trip.  She said, she have heard a lot of good reviews from fellow travellers she met during her trip. From Bangkok to Krabi, it cost us 450 Baht each (but you can get 350 Baht around the Khao San Road).  The ride was a 14 hour drive with a very comfortable air-conditioned double deck bus with toilet and huge flat screen TV(except I sat next to a strange Russian guy who tell me he’s an actor and then later he said he’s a circus performer, he keeps bugging everyone that the bus was too cold even if its not!), while Leizel sat at the back with a Japanese drunk old man. So the trip was really an adventure!

The bus left at 7pm from Bangkok and we arrived 8am at the Krabi town, but we have to take a ‘Song Tow’, it is the Thai pick up truck with two parallel seats at the back, to the pier as we were heading to Railey Beach which means we have to catch a boat to the island.  The Song Tow fee to the pier was 150 Baht which includes the 80 Baht boat ride from Mainland to the island (Railey Beach).

The food at the restaurants are double the price of Bangkok’s street food, from 35Baht Pad Thai in Bangkok to 70Baht Pad Thai at the Railey Beach.  Arriving there after the adventure ride, hungry, and tired, the prices of the food were eating us.  After taking some photos at the shore, we proceeded to our cheap guesthouse hunting and nice local gave us information on where to go from our budget, 400Baht/night per bungalow (200Baht each).

Along the way, we saw a guy selling something in different packages and we know those were local food,  since locals were buying from him and a couple of westerners (actually, one white and asian guy were eating next to it) was a good marketing call for us, asked them what was it and then, brunch time!  We ended up eating there first, as we could not miss a good and cheap food you can find at the place.  His food ranges from 10-50 Baht, but they were awesome! Specially for us, tired, weirded out, and very hungry.

Leizel and I sat there and started munching the good food we found, we talked to those guys and found out that they were in the guesthouse we were looking for, Rapala Guesthouse.  It was really nice to know these people, Nick and Doug, that played vital roles of how Krabi became truly amazing for us.

We settled ourselves in that guesthouse for a bit, but we don’t want to miss any minute in the island because it was really beautiful.  After paying the rent, we head outside excited to roam around and see more beauty of the place.

Krabi has the most beautiful sunsets I have ever seen, magical, as how Doug refers it to be.  Being there is just so surreal, like you are in a place you only get to see in the postcards. It is beautiful.  The rock formation, the caves, the water, fine sand, and the sun are perfectly in place to create a real life paradise.  Not to mention the locals and nice people you meet there (oh well, there were strange people you need to watch out too!), but that is what makes it beautiful (I guess…).