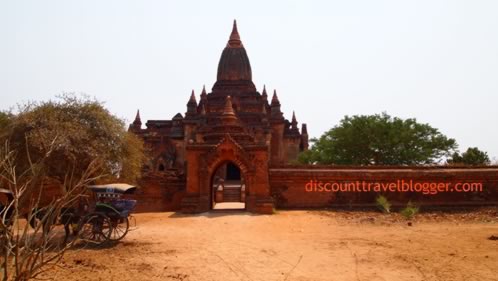 (The start of the Horse Cart Tour)

Looking through the Google images of Bagan photos, I’ve seen amazing photos of its temples ranging from sunrise, sunset, horse carts, hot-air balloons over Bagan temples photos it got me excited on what I will see there.  My original plan was to stay 3-4 days there, but it was shortened to 1 day from the fellow backpackers tip was to visit Inle Lake. 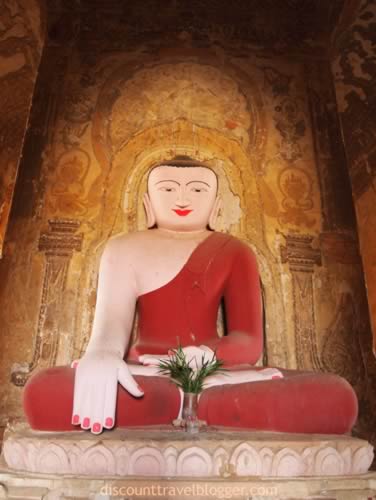 Looking back, I should have listened to my instincts to stay longer in Bagan, but then again, it still good to see other places in Myanmar.  I’m just lucky to have been and seen all these places at once.  Tiring, for trying to see the Big 4 (Yangon, Bagan, Inle, Mandalay) in 9 days when almost half of it were spent on the road. 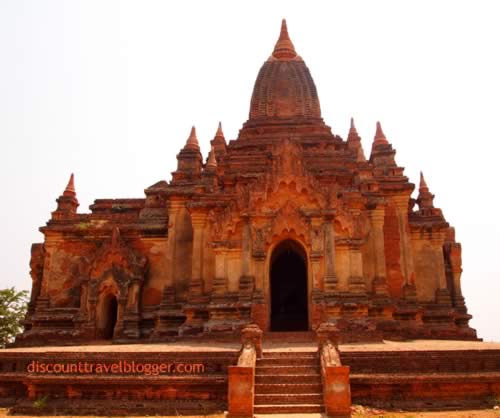 (I don’t know which is which anymore, here’s when I got ‘Templed Out’) 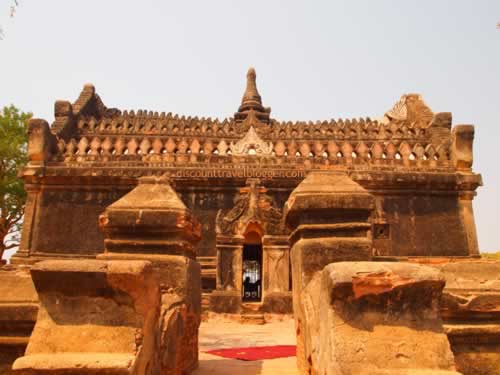 Bagan is such a little, peaceful, and quiet town but also grandeous due to its brick temples that reflects bright orange color, perfect for the photos.  The orange sand and soil makes the landscape glows beautifully under the sunlight.  At some point, looking at my friends’ photos uploaded on their social networks I thought they were edited and they told me they’re not.  Sorting out my own shots I realized my friends were not kidding, you don’t need any editing software to make it looks like how it is no matter how skilled you are in photography. 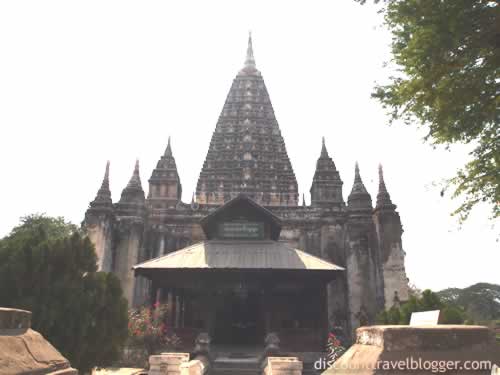 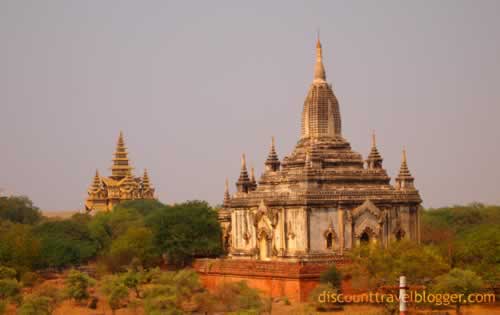 There were hundreds of different temples that seems endless from afar, I’ve seen almost all of them but because they look all the same to me (as the ‘templed out’ syndrome kicks in) I would not remember which was which.  All I know was that paying extra 5000 Kyat (6 USD) to the agreed whole day price of 15000 Kyat (18 USD) shared by two persons on that horse cart ride, quite disappointed me but I did it because I only have one day to see Bagan. 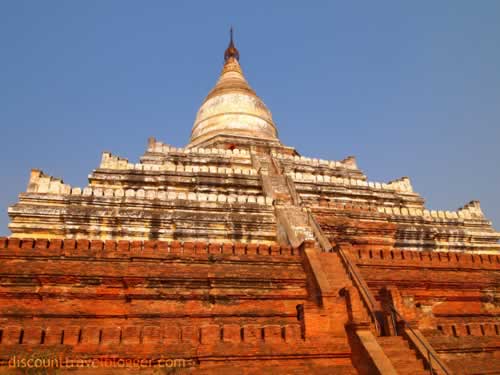 What Did I Find Out About Bagan?

Little that I know of, those of Bagan’s were not just temples but also some were pagodas, museums, and palaces. According to Ancientbagan.com; 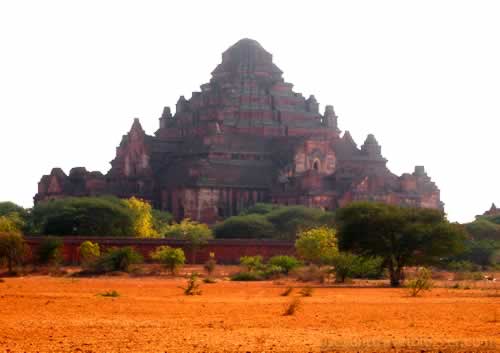 (This looks like a Mayan Temple, isn’t it? The name sounds similar though…) 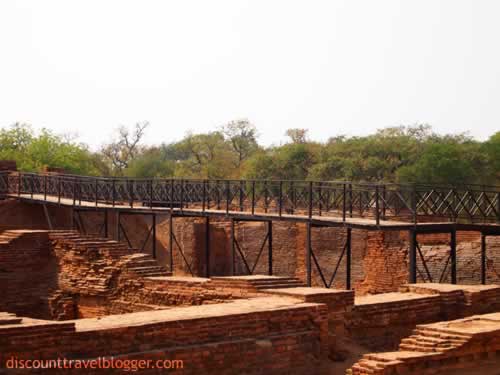 A funerary monument and then acquired cosmic symbolism of Buddha hood containing Buddha associated relics. Also some monuments were built to honor a notable person, or even bring lasting remembrance to an important family. It is a bell-shaped brick structure set on a square or octagonal base, and usually rises to a gently tapering peak gilded metal and jeweled finial topped with a sacred parasol-shaped decoration called “hti”. 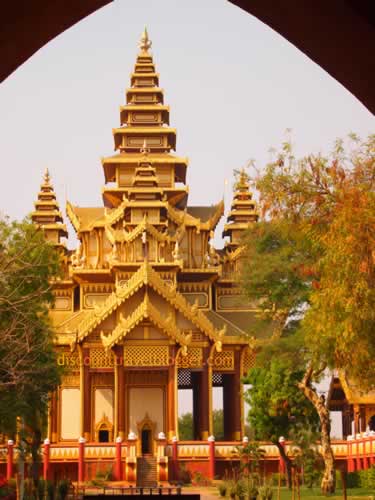 (Now, this is a palace! Something different yeah?) 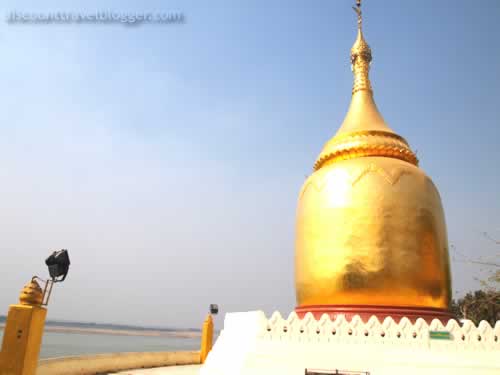 (A replica of ‘The Golden Rock’ at the riverside)

The temples also known as “gu” were inspired by the rock caves of Buddhist. They were larger multi-storied buildings that one could enter. They were places of worships that included richly frescoed corridors with sacred shrines and images that could be worshipped. It is often a massively built square or oblong structure with outer terraces representing Mount Meru, the symbolic home of the gods, and surrounded by a thick wall to separate its realm of the sacred from the outside world.” 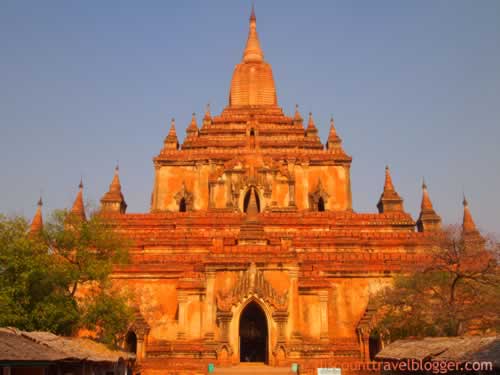 (This temple’s tip was poiting directly to the moon that my camera couldn’t capture so clearly, it was a cool sight though)

Very rich and interesting history, isn’t it?  I am not a history buff like I always say but places like Ankor Wat and Bagan, surprisingly makes me inclined to become one (I guess I’m a spiritual history buff than anything else).

Surely, the humid tropical heat in Bagan was crazy, but that would not stop travelers to see how beautiful Bagan in half or broad daylight.  I didn’t know they light some of the major temples up at night, but maybe because of the heat it drained all my energies out to be interested going back at night.  I thought to myself, “If I were to stay another day, I’d bike around the interesting temples I didn’t get to see much”, yet, so afraid that I would not make it on time to Mandalay on my flight out going to Bangkok (I’m heading to Inle next for 9 hour ride and another 9 hour from there to Mandalay), I rested that case in peace and thought that at least I’ve seen it and there are still so many places to see.  Bagan is still in my travel history, holds a very high part of my favorite places list.  I’ve missed both sunrise and sunset, but I didn’t miss Bagan’s full beauty, and it is truly legendary.

TIP: Bring bottle of water on the road.  You can buy from the shops around while traveling, one bottle isn’t enough but I don’t suggest you carry a lot because they turn so warm easily with that heat!