Eating Grasshoppers in Bangkok was not that bad.  This was not my first time to visit Bangkok, it was my fourth time.  The third was before going to Krabi Islands to meet up with Liezel (my travel buddy I met in Saigon, you’ll be reading more of her in my posts), nothing special happened there just stayed for a night because I was too tired from the 16 hour bus ride (including border stops and toilet breaks), asked Liezel if we could stay a night to recharge before going to the islands. 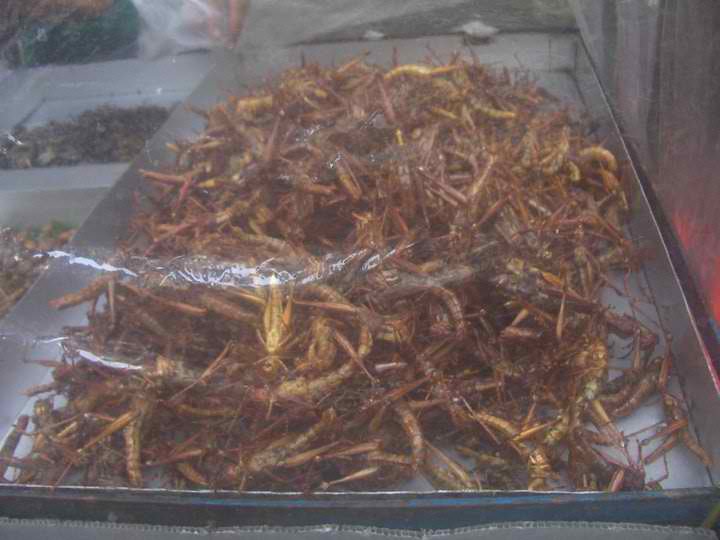 My Buddy and I wanted to try it…

Anyway, so the grasshopper eating moment happen after the amazing Krabi Island moments.  Me and Liezel wanted to try it after we heard it from “Team Canada” that it was not that bad, I was really up for it (so I thought) but I know Liezel was a bit reluctant to try (she’s a dare devil too but not for food, I reckon).  The timing heard her prayers because after roaming around Khao San Road area looking for the bug lady, we didn’t see her.  I totally forgotten about the idea of trying it, it would not be fun without my friend (at least to enjoy her reaction if we can’t enjoy the taste)!

So, Liezel left for home and I decided to stay and meet with Doug and Oanh 2 days later in Bangkok (Oanh did not turned up).  Doug says he’ll be in Bangkok on the 21st of March but we agreed to meet on the 22nd as he said he will meet a friend that night. 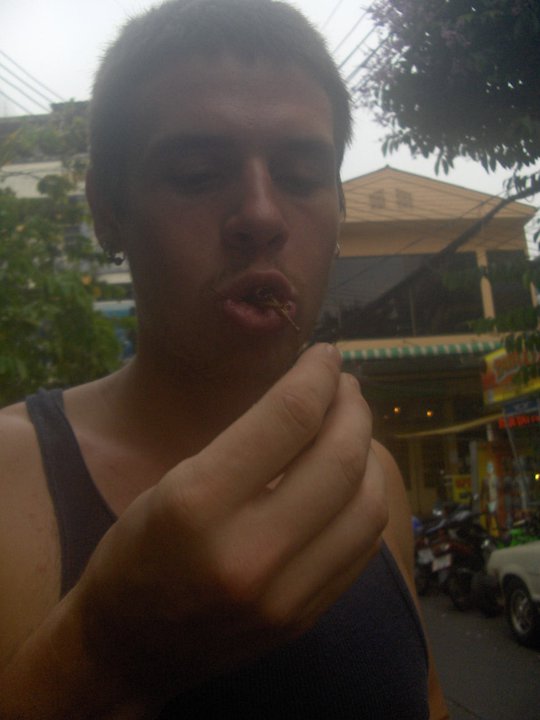 Universe sent Doug for me to eat grasshoppers

March 21st. I saw Doug and his friend at this one bar.  Went to say hello, I was introduced to Kai (Doug’s Thai friend) and I introduce them to Dave.  It was so cool as  Doug started to narrate the story how we met (it was an awesome story anyone in the group would be delightful to share, and I will tell you soon on my following posts).  I wanted to stay for a while and hang out with them but I was hungry at the same time, plus Mary and Oliver (our room mates) were waiting for us back at the guesthouse.  So I told them we have to go and confirmed to Doug if we’ll meet the next day.

Next day, I woke up late at 11am (what can you expect after hanging out with my room mates until 4am?).  As soon as I got out the guesthouse heading to my favorite local coffee lady near the guesthouse I stayed in with Liezel, I saw Madein, asked me where I’m going and he decided to come.  Along the way, I saw Doug at the other side of the road carrying his backpack headed to the Police Station. I called him out and asked where was he headed, he was going to report the wallet he saw on the road with 10,000 Baht at the Police Station (salute to Doug for his honesty!).  So, the 3 of us went to the coffee place bought the guys Thai Iced Tea and Iced Black Coffee for me (cost me 40 Baht for 3 tall plastic cups of drinks).  I, then decided to have some breakfast at the street food vendor, Madein left and Doug was encouraged by the food lady to get himself a Chicken barbeque, rice, and papaya salad while I had a Chicken Fried Rice.  After that was just killing time for Doug until he needs to get to the airport, so we did it at the Internet shop where he was checked in. 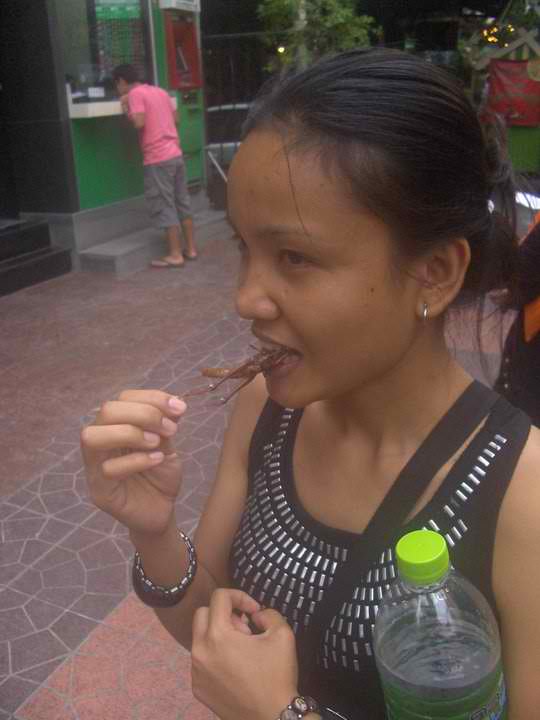 Me and The Grasshopper

Few hours passed and we got bored.  We walked around Khao San Road and he asked if we (Liezel and I) tried grasshoppers (we told them we will try them when we’re back in Bangkok),  I said we didn’t see the bug vendor, so he was suddenly enthused to look for the lady and let me try it! (uh oh, I thought because I wasn’t prepared for it that time).

He knows where to find it, when we went to the place the lady was not there (I was a bit relieved) but as soon we decided to go the bug lady came! I saw how excited Doug was (Oh no!), so I said let’s just wait until she’s settled.  There were different bugs in there but I was told the grasshoppers were the easiest.  Seeing other things on her menu was not very inviting such as crickets (looked like giant cockroach), ants, scorpions, frogs, etc…

Doug bought the grasshoppers for 20 Baht.  Asked him to eat it first! (hahaha) He did.  Its my turn, so I was thinking “So this is it, point of no return!”, I know I have tried weird varieties of food before but it was ages ago when I was way much of a dare devil and as I keep telling myself I want to try this and that, like the Tarantulas of Cambodia (that I got out because I have a valid excuse that I was in transit and would not want to put my gut into possible trouble on the road), that time was the moment of me and that grasshopper (telling it like I’m in the story of the Princess and the Frog), only it was not a frog( I probably should have tried the fried frog!) and I did not kissed it but rather, ATE IT!!!  The grasshopper did not change into a Prince Charming but it turned me into an insectivorous monster ( my imagination is running high now) and also because its dead fried with Soy sauce! (make sense, she killed my Prince Charming).

After 2 grasshoppers, Doug said he had enough (same here) so I asked him if I could keep it for my room mates and ask them to try it (but they did not come soon and I found it weird carrying grasshoppers around me all the time and chuck it in the bin instead).  So that’s how me and the grasshopper broke up.

3 thoughts on “Eating Grasshoppers in Bangkok”