Food is part of the adventure traveling around, you get to try different delicacies every place has to offer.  May it be gourmet dishes, street food, or fear factor delicacy it is something worth experiencing no matter what level you can take it(you can always say ‘No’).  In Southeast Asia, there are a lot of great food to choose and try and even though I haven’t tried them all at least I’m proud enough to say I’ve tried some.

Eating grasshoppers in Bangkok was an experience and if I wasn’t in transit in Phnom Penh to Siem Reap, I would have tried the Cambodian delicacy (Fried Tarantulas).  In the Philippines, the world known delicacy we have is ‘Balut’.  Balut is a steamed duck egg with its embryo (from growing to full duckling form), most locals would prefer the tiny embryo but most of the time you’ll get a semi fully formed duckling in it(with the tiny beak, legs, and furs) which makes eating ‘Balut’ a full adventure not just to foreigners but also to some locals. 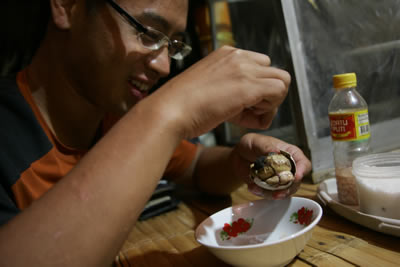 Salt and vinegar are the condiments to eat with Balut to enhance the good taste it has in it(that’s for fooling ourselves there) and lessen the after taste.  It is not even a comfort food but it’s like how men prove they’re “the man!” when they do.

Well, our friend Nick from Canada was so tough enough to try ‘Balut’ around me and Leizel and here’s what he said about it;

“Well I heard lots about it, but no one really told me what it would taste like. so I didn’t know the whole process. That was intimidating haha! It tasted like mostly yolk, which I can deal with, the soup was the best part and the weirdest part was opening it, like you got a better look at it as you peeled the shell away, and it started looking weirder and weirder!”

I must say, Nick’s pretty cool with the food adventure as he tried so many fear factor food challenges from Thailand to Philippine delicacies (some I could not even eat, yet he did). Bravissimo Nick!  Well done as you have eaten most ‘strange’ food we have here in the Philippines! There’ll be Doug to eat another Balut next time (since you made me eat grasshopper Doug, you owe me a Balut!).