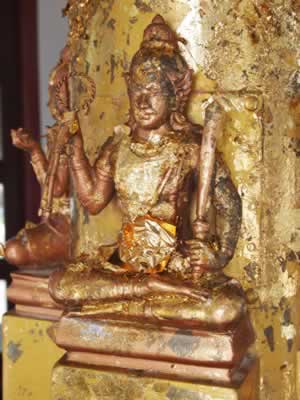 (Buddha carvings at the Independence Shrine)

My first project in Thailand was in Pattani and as you have read from the previous post that I went traveling there by train, so excited to get there at least a day earlier to see the area and get to know the place, it was nice of my boss to let me get there a day early and pay for my hotel too. 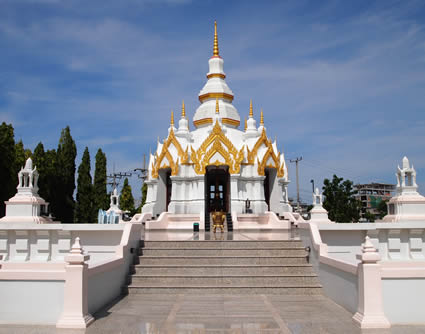 I wouldn’t want to tell you the whole story and the trouble everyone’s been through, so let me just tell the bright side of the trip.  My first day in Pattani went okay, having to meet ‘angels’ (I call random people who help me everywhere my ‘angels’) along the way who were sincere enough to help a stranger like me.  The old guy sitting opposite of my train seat who was helping me buy food on the train to survive, the cop who helped me get a transport from the train station to my hotel, the train station staff who lent me his phone to call my boss when I figured my phone strangely stopped working in Pattani, the hotel receptionist who helped me get a free motorbike ride to move to another hotel, and so on and on and on… 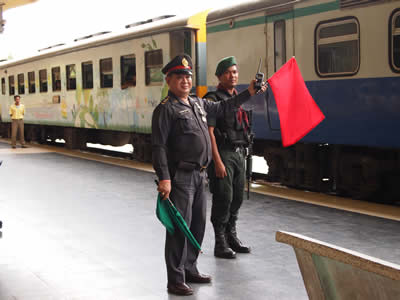 (The cop who helped me get a ride, a smiling soldier, the guy in far left wearing yellow shirt was the guy who lent his phone to me, these are the Pattani angels!)

The first project here in Thailand was supposed to be 4 days that turned out 2 days, I wouldn’t delve into that chaos.  I know my blog seems like I’m having a very rich lifestyle, but to all the people reading this, please, please, I don’t live a lavish lifestyle.  I am just going with the flow without any plans just going to where my feet and my instincts are guiding me to go.  You wouldn’t want to hear my dramas or you might end up not reading my blog anymore.

My first day was all about sleeping and resting all day after a 25-hour train ride from Bangkok to Pattani.  The following day, Sunday, I met up with my colleagues after I got a call from, Ian, to move to the hotel where the guys are staying.  I met Chris (Team Leader) and Michael, we had lunch together (brunch for me that time) at a local Seafood Restaurant where, Joel the Hotel Manager, offered to drop us off with his poshy car when we couldn’t get the receptionist to call a taxi or motorbikes for us.  Joel, is such a nice cool guy who also offered to call him back when we’re done eating so he could pick us up at that resto (what a great guy  he is!).

Anyway, so after lunch we tried not to bother Joel, tried asking the waitress to get us a taxi or motorbike taxis but no success. No one speaks English at all, we had problems ordering our food too so we ended up calling Joel, again.  Surprisingly enough we were touring the town with him after that.

Joel brought us to their city’s Independence Shrine, I thought it was a temple, but he explained that every city has it, indicating the day it became a city.  We hang out a bit there, took off our shoes at the stairs which made our photo moments a bit painful due to the hottest marble floor (I’m not really sure if its marble) my feet have ever stepped on.

The town is not a touristy place and according to Joel, they have ZERO tourism there. I can understand why,  when your train started to have a sudden visibility of soldiers walking back and forth checking out the passengers, then you get to Pattani station and you realize your phone doesn’t work which you will need to ask someone from a phone shop to register it (you’ll need your passport to do it) or buy a new sim card (which is what I did because no one seems to speak English, you’ll need your passport with that too), and all other indications that this town isn’t a tourist friendly area.  Something like some provinces in Mindanao, Philippines are like. 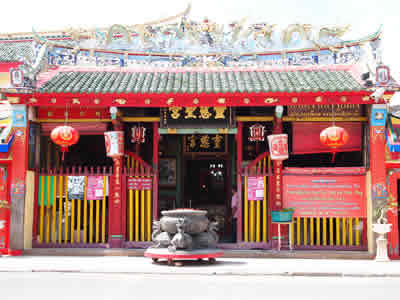 After a brief photo shoots Joel brought us to San Jao Leng Ju Khieng Shrine, a Chinese Temple with a somewhat cool legendary story behind it.  It was a nice temple built dated back from the 16th Century.  Old huge bells, drums, and gongs are displayed and even old scripts were hanging on the walls proving how old this shrine is. 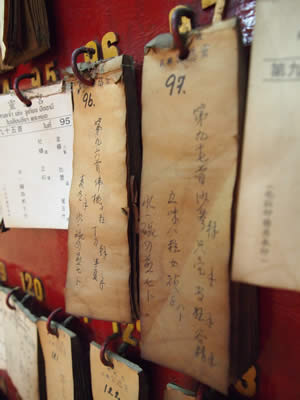 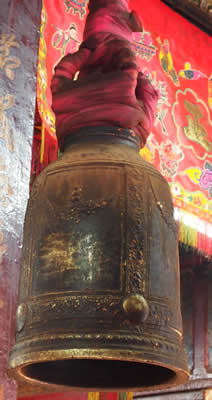 When Chris asked Joel about the Central Mosque, Joel said it is around 10 Kilometers away which we don’t want to bother Joel much more to tour us there.  The beach was at the same distance and we have heard enough warning that it is not safe to go there at all.  Although, we can see a good view of the ocean from our hotel, Joel said that is not the beach but rather the fishing area.

We have seen enough of the town and took a lot of Joel’s time already, he is such a great guy that I couldn’t thank him enough in behalf of our team too. 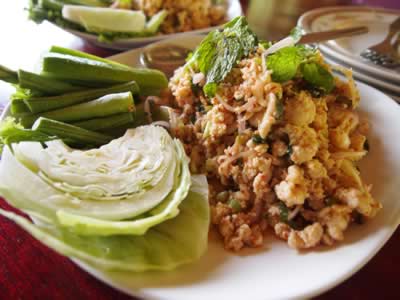 I know I’m a budget traveler but on this project, I think I was forced to stretch a bit of my budget since most of my expenses are paid by the company, plus the fact that dining at the local restaurants may be chaotic without English menu or no waitresses that speaks even a tiny English whatsoever.  I survived my first day on street foods just pointing to the sellers what I want, but then with my colleagues, Chris and Michael, I wouldn’t have to put them into my hardcore budgeting skills.  Every night (actually just 2 nights), we would eat dinner at the hotel’s restaurant ordering Pad Thai all the time, not for Chris though, he’d managed to get different order from the menu photos.   I’d stick to Pad Thai and a bottle of water for 100 THB for 2 nights, all good. 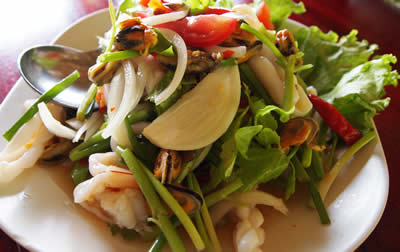 The Seafood Restaurant brunch was splurging to me having to pay 200THB for Fried Rice and Laab (it was supposed to be 250THB, Chris spared me that 50THB, Thanks Chris!).  Again, Chris went with the photos and ordered some kind of Seafood Salad and Fried Rice, it was really good, he let us try it. 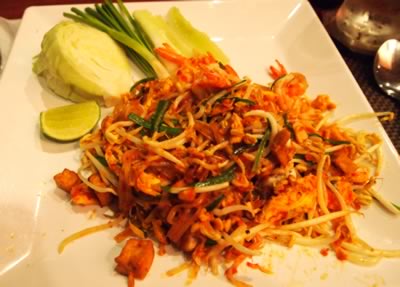 In the afternoon, we had our coffees at the lobby.  I had Black Iced Coffee with extra sugars, Chris got Iced Coffee, and Michael had Hot Coffee with Condensed Milk. So I stood there after they ordered, just to make sure I’ll get my ‘Black’ Iced Coffee and after pointing to coffee and sugar containers they finally understood what I meant.  I am just taking photos of their preparation and I was lucky to get a good show of  Thai Ice Tea Tahrik Performance, it was unexpectedly cool! 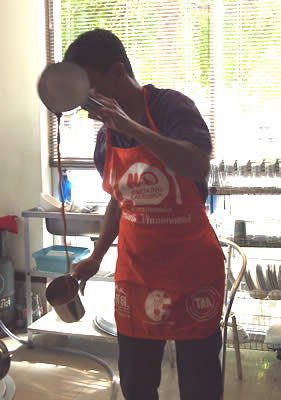 Since I’m already rambling about Pattani and I’m sure you want to know everything about my adventures there (but I will not tell you the bad ones), might as well tell you how awesome Joel’s hotel was.  In comparison to the other hotel I stayed in for the first night, with the same price? Joel’s “Southern View Hotel” is way better.  We get WiFi in the room, Air-Conditioned rooms, Flat Screen Cable TV, Hot Showers, Mini-bar, nicer interior.  In a way, this is obviously a simple marketing for Joel’s Hotel but also an honest review, believe me, you don’t want to end up at that dodgy hotel I stayed in paying same amount of money for under service. Just remember Southern View Hotel when you decided to bore yourself and go to Pattani, this hotel can at least help you a bit entertained and sane. 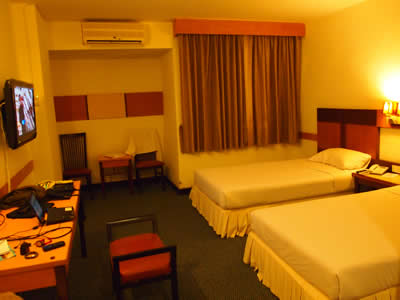 So, that’s a brief story of my stay in Pattani.  Going back to Bangkok with Michael, we also went by train but this time we took the Air-Conditioned ones.  I suggest you take the air-conditioned ones for a long train ride, way better to endure it if I may say.