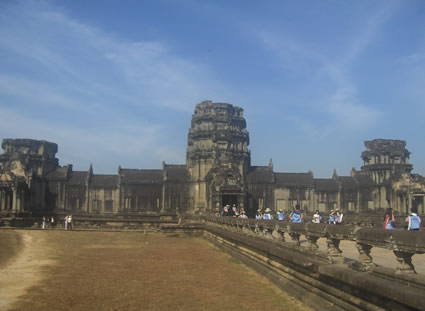 How It Was Revealed to Me

Two years ago, when I first heard about the ‘Tomb Raider’s Temples’ is just around the corner of Asia and it is not that a mission for me to visit. I began weaving the dream in my head on how to get there. I don’t have any idea how, but after 2 years I can’t believe I have given an opportunity to do what I want. To travel by myself.

It is overwhelming that after deciding to work in Singapore and was rejected a work pass twice, means I have to leave Singapore and was called for Cambodia(it was a blessing in disguise to live a dream). I didn’t go directly to Cambodia, I went home instead but after 2 weeks I fly to Saigon to make the dream going to Cambodia a reality, as well as traveling solo. 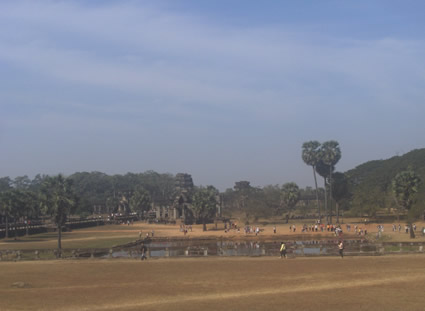 (View of the grounds from Ankor Wat)

Cambodia Gave Me a Sense of Personal Freedom

Travelling solo is really cool. It gives me a sense of responsibility to myself and people around me(literally). I get to learn more, and it began in Cambodia. Sure, I was travelling everywhere since 2004 but its not really solely travelling, it includes work or business, so Cambodia made me feel so free.

Being in Cambodia was awesome! People, the place, the country itself, the temples, culture, and a lot more made me feel at home. The target was just to see Ankor Wat. I chose the 1 day tour that costs $20USD (I suggest you do the 3 days for $40USD if you’re into temples!), it was so tiring but amazing experience to get up really early. Although, I missed the sunrise which I recommend you should see if you decided to do the 1 day tour(make it the most tiring day in Cambodia, get up at 4am and finish at 6pm’s sunset), but we experienced most of the temples until sunset, still all good.

I couldn’t believe myself seeing it in front of me, like I’m transported to some ancient time like a person in a time travel movie. The Ankor Wat was the first in our Itinerary. I was travelling with 3 other people by the way, Amy and Lisa, the girls from UK travelling around for 8 months when I met them (giving me travel tips to my next stop, India, Nepal, and Tibet and vice versa, as they plan to go to the Philippines) and Shogo, the quiet nice guy from Japan. All of them became my immediate friends as we (Amy and Lisa) keep sneaking out of our watchful tour guide to take more photos of the majestic temples! and Shogo, the nice one who was my photo partner (we take photos of each other alternately on great photo spots) in the whole tour and lending me his iPhone to take more photos when my camera ran out of battery!(so be ready to have extra battery for your camera for the tour).

It was a fun trip, not to mention the overwhelming scenery of the temples that makes my imagination runs trying to envision how the early Khmer people lived way back before it became a tourist spot. 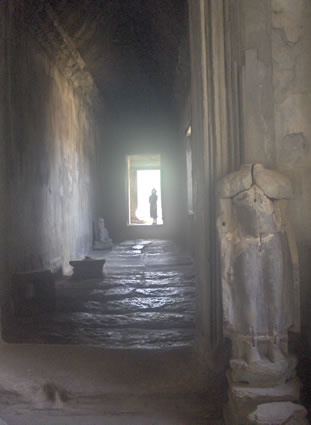 (The Ruins of One of the Buddha) 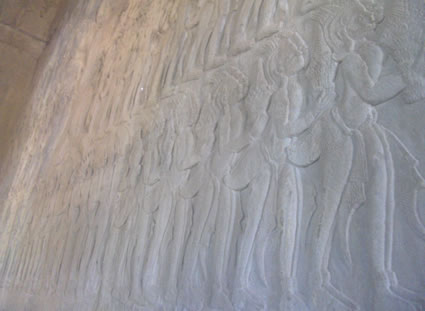 Ruins of The Temples

Ankor Wat is the most famous temple as it is the largest one among the temples in the area. Inside the temples, you can imagine how beautiful it was during its time. The Little Buddhas were beheaded and said was sold out to tourist which is sad, it happened, living the locals the scraps and ruins of the whole that once they own. The walls are carved with the religious stories that crosses between Hinduism and Buddhist story artistically detailed. 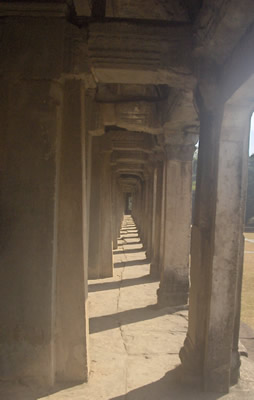 The corridors were so mysterious that walking along them you can feel the spirit of good things happened within the walls of the Ankor Wat. I know I made your imagination going about how amazing it is, isn’t it? But wait a while until I write about Ta Prohm and Ankor Thom, the temples used in Tomb Raider, so hold on until that post comes up. Meanwhile, enjoy the photos of my old bad 4MP digital camera and photo from a friend, Cailin(Thanks Cailin!). 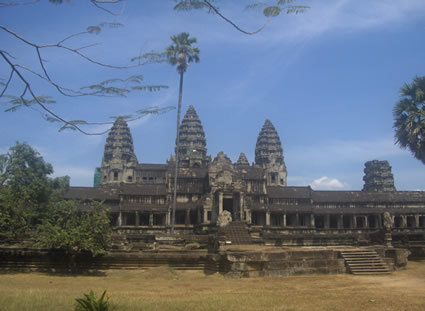