I know it’s such a shame how I haven’t been much around my own country and that I know more about other Southeast Asian (SEA) countries than to travel around even in Metro Manila! (I know right?!!).  When fellow backpackers ask me about moving around SEA, I know what to say but here(I’m currently back here in my country while writing this), it’s another story.  Yet, there are cool people like Amy who says, “It’s okay, it’s always interesting to know other than your own, right?” or just like what Nick says, “Hey, I haven’t been around Canada either!” which somehow eased my embarrassment of that moment.

After several times of being questioned of the same thing, it marked something in me that I should at least see the beauty of my own because unlike my friend Leizel, I could not compare the beauty of our own to others  just like how she compared Thailand’s Krabi to Boracay, Philippines(although it did me good, appreciating every beauty I see everywhere I go without too much comparison).  There’s a big possibility to see what my own has to offer  soon(but as usual, I want to do it the cheapest way possible!). 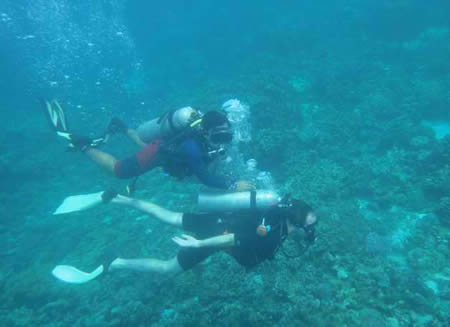 Hmm? Frances is suggesting to do Bohol for the paramotor or Palawan to dive, but Leizel got me interested with Davao for scuba diving (she suggested a place where the cheapest diving center is) and the fact that I could do other extreme sports there made it to my top priority to go to late this year(since its quite a distance from where I live, Manila).

I was planning to travel solo but Frances says let her know and she would want to go with me to Davao.  I will, but I will also let her know that I stay ONLY in the cheapest places, eat cheap (street foods and stuff), and I think she’s an independent traveler would-be too that I would not have to baby sit or tell what and what not I do in my trip. I’m looking forward to that!