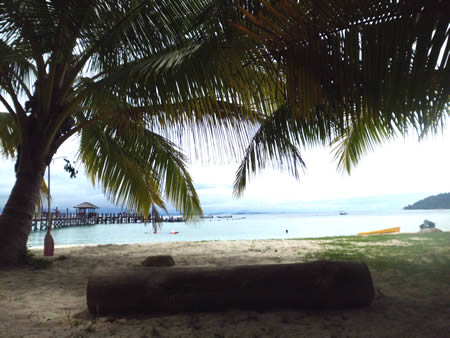 After spending 2 nights in Brunei, I went back to Kota Kinabalu via ferry again. It was raining heaps when I arrive, I didn’t mind that day ’cause I’m quite tired from the trip and thought  I’d be a li’l lazy for a day.

The next day, it was still raining which sucks. I can’t do anything even if I wanted to go the islands. I started regretting going back earlier, I should have stayed another night in Brunei and went to join Jamie on his mission to find this Hassanil Bolkiah’s mosque rather than being stuck in the room.

The 3rd day, I checked out Kinabalu Backpackers Lodge to head on to the islands.  I could not accept to just be stuck in the room while I’m in Malaysia.  I headed early in the morning at the ferry terminal, paid a discounted price of 2 islands to see for 23 RM from the hostel’s 4RM discount vouchers ( I saved 10RM there!).  The Filipino guy that talked me to it yesterday when I tried to phish for more information was happy to see me (business, of course!), he won me over by telling me about the discount vouchers their company have that I can get from my hostel, which I took 2 (maybe I want to go the next day to be ready). 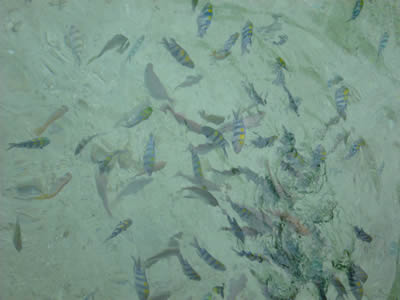 (Surface water shot, it looks amazing at the deeper side of the sea)

Aboard a speedboat we head to Mamutik Island, and there I met the Filipino guys who were so friendly and accommodating not only to fellow Filipinos but to other guests too.

You still have to pay 7.20RM Terminal Fee and a one time Island Fee of 10RM(PHP130).  The most common islands were Pulau Mamutik, Manukan, and Sapi.  I took Mamutik-Manukan Islands that day, it was cool to meet a lot of Filipinos working everywhere there. I met ‘Kuya’ Mahc and Marine.  Marine was nice enough to lend me his snorkel while waiting for the one I’m renting. Snorkels could be rented at 10RM (PHP 130) and life vests separately at the same price.

Later on, Marine was super nice to tour me around amazing snorkeling spots using his fins, I was holding on to his arms while he swam. Wow! Underwater view was fantastic! I hate that I didn’t have underwater camera to share you what I saw. There were lots of beautiful species of fish that I have not seen but in my niece’ favorite fish online game, and I was seeing it for real! My imagination brought back my mermaid fantasy as I got to swim with them, although there was one specie that bit my leg several times which freaks me out.  It’s got really sharp teeth giving me lots of wounds from it.  I had a short jungle trek with Marine before I left the island and saw giant lizards or what they called and we called ‘Bayawak’. 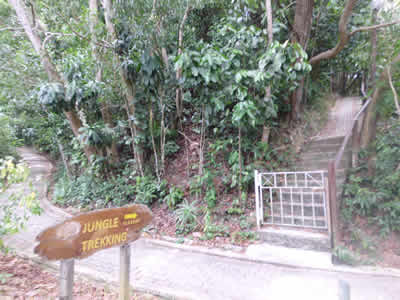 12pm I went to the other island, Pulau Manukan.  Had a good lunch for 3RM and an expensive drink of canned F&N cola for 3RM (that was an expensive drink! Big bottled water was 6RM when 1.50RM it was from the city!). After that meal, I went to walk around to see more of the island, and there were bunch of Malaysian kids who wanted to have their photos taken with me! I stayed to have a little chitchats with them and Aida the only girl in the group knows how to speak Tagalog.  Her mom is Filipino, they were funny and cool, some of them were stalking around the island so when i saw the jungle trail, i started trekking on my own.  It took me around 30 minutes trying to reach what to find but there’s none, so I decided to head back when I saw 500m sign and I was worried I would not have enough time to swim before the boat picks us up at 4PM. 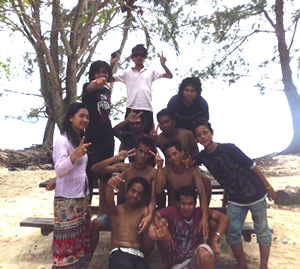 I went to swim at the area where its not to crowded, but I was disappointed how the beach were full of trash underwater, I did not swim that long and told myself Mamutik was way better!

4PM when I went back to the city.  Took a good lunch-dinner from Peppermint, a nice Vietnamese restaurant and walked to find the bus terminal.  It was not really a long way to walk but since I’m carrying my backpack I would need to take a bus to Tanjung Aru where the Beach House Hotel is near the airport and the beach (good for my last 2 days in Malaysia just to chill).

I met lots of Filipino drivers there, most of them could not speak Tagalog anymore because they were in Malaysia for a long time.  I waited for the bus going to airport which was LTT 16A from 6.10pm up to 8.30pm.  None, arrived even after those bus drivers has gone for a trip and back to the terminal.  One of them was kind enough to get me to a van LTT 16A, showing me from my map he said I still have to walk.  Not bad I said, that’s nothing compared to the walk from the ferry to bus terminal! 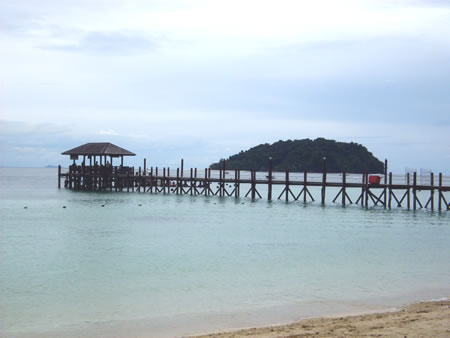 The guy sitting in front of the van was a Filipino, he was kind enough to tell me where to alight and paid my 1RM fare.  I was paying my fare when he said, I paid it.  Cool isn’t it? Filipinos have the giving attitude wherever we are.  He even accompanied me to walk to the hostel I’m looking for before he goes back to his place which is quite a long walk away for some non-walkers (I’m assuming just because he said its ages away going to the hostel from where they dropped us off when its not).

After checking in, the young woman at the reception said there was one Filipino guest checked in there.  I just had a shower, looked for a place to eat since that long wait at the terminal and a little walk made me hungry.  I went to the nearest 7-11 and just got myself cup noodles, bottle of water, chips and ice cream all for 4RM (PHP 52), head back to the hostel had some chitchats with my roommates Arnold (Philippines) and Sean (USA), then crashed. Dang., tired