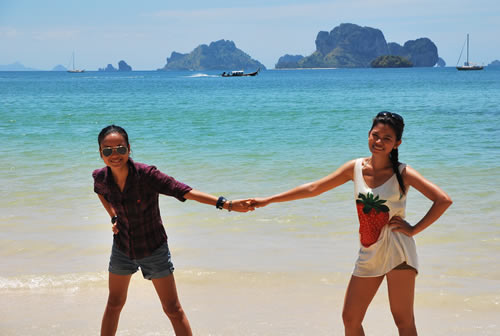 My point is, you don’t know what they are thinking and they don’t know you as you are to them. I met a German guy in Cambodia who said, “This is why its called Thailand!”. It took me awhile before I realized what he meant, and even though I have a hint I do not want to generalize people wherever I go. Although it was not meant for me, it’s such a bad thinking. There are women out there like what they thought, but they don’t know who’s who until the person let them know who they are.  Here are some of my few encounters of mad men…

I won’t forget the 2 worst people I met travelling, the first one was a Spanish guy who claimed to be a ‘Foot Volley Player’ who approached me and Leizel on our first day in Railay Beach, Krabi (Thailand). Well, I told the Team SRC (Sticky Rice & Chicken..haha!) the whole story  but I will skip telling you here and I won’t forget what he said, “We are in Thailand!… That’s not what I heard about Filipinos!”. I was like, Whaaaat?! Stereotyping Filipinos? Does he know what we can stereotype him under? Does he know Philippine history? Really?! If my Spanish friend that used to live here in the Philippines, Chus, heard about this, he might want to orient his fella about Filipinos. Good thing, Team Canada was there to accidentally rescue me from that strange situation! Kudos to Team Canada, specially to Doug and Nick!  By the way, this very moment I’m writing this post, this guy is bugging my buddy through Facebook (good thing its just on FB)! hahaha! Such a sleaze!

Another one is a young Polish self-centered man I met in Bangkok dorm room, who said to me… “So, this is your dream hey? To be around western guys?”. WHOAAA!!! WTF?!, what was he talking about? Dude, I was traveling solo and I wasn’t talking to anyone without them talking to me first  (especially when I’m alone )and he coming up to me like that when I was walking with them in Sukhumvit just pissed me off and immediately got me walking out of his pursuit of clubs for his ‘glow in the dark’ performance (which I heard was terrible) and slept early instead (he’s too full of himself , very much an A**hole!).

TAKE NOTE: Don’t take a shit from anyone when you’re travelling! Know what to do in cases like this. Don’t waste your time to a place or with people you think will ruin your day. You don’t want to prolong the soon-to-be bad memories of your trip. Follow your instinct all the time. Women, you should be good at this!

Still, that will not stop me to travel solo again but I know where I stand and how to choose the right company, and you better do the same ladies.