Traveling is such an adventure itself, it does not matter where it leads you or where to go but the adventure begins along the journey.  From the people you meet, the transportation means, the views you get to see along the way, and the experience of all these. Travelers, I believe have the better views in life (backpackers most especially) because they have seen different parts of the world in their most different situation and living conditions.

I remember hearing people describing me as such an adventurer, I did not consider myself one.  Looking back, I used to travel as early as 8 years old to my dad’s place of work 12hour drive north from Manila where we used to spend our summer with my siblings and cousins, and I always wanted to travel different countries when given a chance, I remember thinking.  2004 when I first left Philippines to work on a cruise ship, it was a huge dream come true (not to mention the intensive trainings before going on board a ship).  I was overwhelmed by the fact I will be traveling Mediterranean Seas and see different parts of the world.  It wasn’t as good as it looks (working on board), but there are amazing things I have experienced.

Our joining port was Israel, in Haifa but we were fetched in Tel Aviv Airport.  I was fascinated by their language by the way, Hebrew, which in a span of 2 months I think I can understand few basic words that locals that could not speak English can talk to me in Hebrew slowly(though I could not reply back but just ‘ken’ and ‘tuda’ which means yes and thank you).  If only not with their complicated writing, I would have learned more their language.

(After partying in Alanya, Turkey)

(Chilling out in the streets of Thessaloniki, Greece)

(After shopping for my 22nd birthday in Marmaris, Turkey)

Anyway, cruising is fun but never without flaws.  Of course, sea sickness is the worst because you could not control the waves of the water (not to mention how wavy it can be crossing from Israel to Europe, that was hell!).  Yet, it’s worth it when you get to party in Alanya, Turkey on Wednesday night; celebrate your birthday in Marmaris, Turkey the next day; chill at the open pool deck during the 3 day transit to Europe (which means no land and no phone signal, simply at sea); have a morning jog in Barcelona, Spain; afternoon coffee in Venice, Italy; before going to enjoy the beach in Niece, France.  Not to mention the casino in Monaco; shopping in Malta; enjoy the view of the ancient ruins in Rhodos, Greece, or that cliff diving I never tried in Santorini, Greece(that I wish to do when I come back given a chance).  Sounds incredible lifestyle isn’t it?  It is for the passengers, not for us who have to work long hours, but still those were great memories of experience I had.  The people I get to know, friends that became family to me, and the concerned passengers. Too bad I don’t have my own camera then, that photos I have were just few copies I got from old friends when I was there. 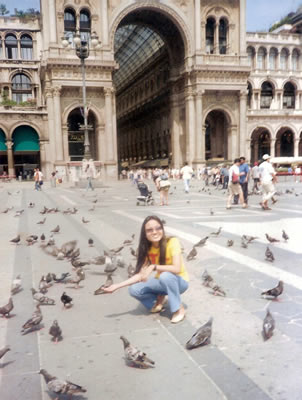 Did you know how great Israelis are?  I received several work offers from the passengers during the time I worked there as they noticed how we worked there.  For some reason, they too love Filipinos that one passengers have described us as “most sought after workers in Israel”. What an adventure hey?

I did not know then that it was the beginning of my real adventures in life.  I still hear people describing how adventurous I am, and this time I think I would accept that description.  You on the other hand, will be part of the upcoming adventures I will have that I will share here on this blog.  Keep following me for more tips and adventure!

3 thoughts on “Adventures in Cruising Mediterranean”